ProdID: 3707 - Seeking a Friend for the End of the World
Directed by Lorene Scafari 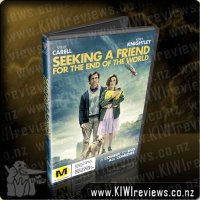 Disclosure StatementFULL DISCLOSURE: A number of units of this product have, at some time, been supplied to KIWIreviews by the company for the purposes of unbiased, independent reviews. No fee was accepted by KIWIreviews or the reviewers themselves - these are genuine, unpaid consumer reviews.
Available:
December 2012

Seeking a Friend for the End of the World product reviews

A 70 mile wide asteroid is en route to Earth and the last best attempt to counter it has failed. Also failing is the marriage of soft spoken insurance salesman Dodge. The breaking news that the world will end in an estimated 21 days cues his wife to leave him on the spot.

Dodge is a man who has always played by the rules of life, while Penny his neighbour is an extroverted woman who hasn't. From these opposite perspectives, both initially choose to navigate the impeding end of the world with blinders on. Dodge declines joining his friends in increasingly reckless behaviour while Penny fixates on her relationship issues with a self-absorbed musician.

The two misfits first meet when Penny has a rough night and then again when she belatedly delivers Dodge a lost letter. The letter could alter Dodge's future; it's from his high-school sweetheart Olivia, the love of his life. When a riot breaks out around their apartment building, Dodge realises he must seek Olivia out before it is too late while Penny makes the decision to spend the last days with family in England. Seizing the moment, Dodge promises to help Penny reach her family if she will provide transport for the two of them. She agrees and they escape.

On the road together, the unlikely travelling companions' respective personal journeys accelerate and their outlooks, if not the world's, brighten.

I had seen the trailer for this movie a couple of times, playing before the DVD I had rented got to the main menu screen. Some of the best movies I have watched have been found this way and not via t.v etc.

The movie instead, centers around Dodge, who has just been mellowly going through life, and Penny, who has never managed to figure out exactly what she wants in life. After she hands him a letter that ended up in her letterbox, they agree to travel across country. She will help him find his first love, and in return her will find her a plane and pilot to take her home to her family in England.

There is a great range of stuff in this movie, a little drama, a little romance and a little comedy. And everything was such a good mix, the friends a bit crazy in the final days, but not so over the top as to ruin the movie.

I really enjoyed this movie and I was really glad when the movie was over that it hadn't followed the majority of end of the world movies. Some people may feel like it is unfinished in ways, but I felt that the movie in itself was perfect and I can't wait to loan this little gem of a movie to friends and family.

Frustrated writer Jack Torrance takes a job as the winter caretaker at the ominous, mountain-locked Overlook Hotel so that he can write in peace. When he arrives there with his wife and son, they learn that the previous caretaker had gone mad. Slowly Jack becomes possessed by the evil, demonic presence in the hotel.