« You Don't Mess With the Zohan review 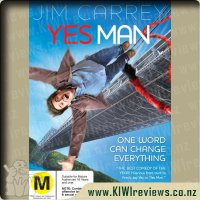 Jim Carrey returns to hilarious form with this romantic comedy in the same vein as the Carrey classic LIAR LIAR. After a few stints in more serious features like ETERNAL SUNSHINE OF THE SPOTLESS MIND and THE NUMBER 23, Carrey seems right at home playing Carl, a divorce who starts out the film depressed and withdrawn, scared of taking a risk. Pressured by his best friend, Peter (Bradley Cooper), to get his act together or be stuck with a lonely life, Carl attends a New Age self-help seminar intended to change "no men" like Carl into "yes men" willing to meet life's challenges with gusto. Carl is reluctant at first, but finds the seminar to be ultimately life-changing when he's coerced into giving the "say yes" attitude a try.

As the first opportunity to say yes presents itself, Carl hesitantly utters the three-letter word, setting the stage for a domino effect of good rewards, and giving Carrey a platform to show off his comic chops. But over time Carl realizes that saying yes to everything indiscriminately can reap results as complicated and messy as his life had become when saying "no" was his norm.

The always-quirky Zooey Deschanel adds her signature charm as Carl's love interest, Allison. An unlikely match at first glance, the pair actually develop great chemistry as the story progresses, the actors playing off each other's different styles of humour. Rhys Darby also shines as Carl's loveable but clueless boss, and THAT 70s SHOW's Danny Masterson appears as another one of Carl's friends. While YES MAN marks no major departure from Carrey's previous work, the sweet crowd pleaser manages to showcase two sides of its leading man.

I went to this at the movies with my husband and afterwards was quick to tell my mum that she had to go and see it to, since then I have bought it on DVD and watched it several times.

Carl ends up going along to a self help seminar where he butts heads with the leader and then thinks he has to say yes to everything no matter what it is, and when he says no to something things seem to go wrong. Thus we have many opportunities for some good laughs and the movie doesn't fail, from his friends taking advantage of the situation to falling in love and trying not to have her think that he only said yes because he had to and so on. There's also a short song, which led to me downloading a couple of songs sung by the group in the movie.

There isn't much in the ways of special effects, though they do make use of a stunt double for a motorbike ride, which they didn't really hide too much, which adds to the humour of the movie. The acting is awesome and fully believable and whilst not much of the supporting characters have much development this isn't necessary for the film to progress in any way.

This is such a fun movie, I love re-watching it.

Princess Fiona, however, rallies a band of royal girlfriends to fend off a coup ... more...