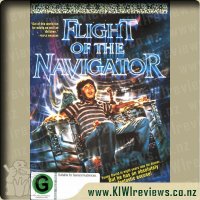 Flight of the Navigator product reviews

After a mystifying disappearance aboard a spectacular, futuristic spacecraft, David Freeman returns to earth possessing vast, undiscovered knowledge about the farthest reaches of the universe. With these sudden navigational powers, David is able to take the fantastic flying machine anywhere he desires.

This is an oldie but a goodie. I was sorted out some DVDs when Miss 4 brought me this movie and said she wanted to watch. She's usually quite fussy on movies so thought I would give it a go.

It had been some time since I saw this. Once you put aside the time warp with clothing and hairstyles and acknowledge that it's set in the past you can sit back and watch something that really is suitable for children. Although I did have to stop the movie and explain why the telephone had a cord and why computer screens looked funny. Which of course made me feel more than a little old.

Seriously it was refreshing to watch a children's movie which I enjoyed as much as Miss 4. She became really invested in what happened to David and especially the space ships bits. Won't go into too much detail on the story. Suffice to say she liked the ending and we were both left with that cosy feeling at the end. You know the feeling that it all worked out and in fact it was all going to be good from here on in.

Since that night we have watched it a couple more times and it has now taken it's place in the kids shelf along with other staples like Mary Poppins. So if you are wanting to watch a 'live action' movie with your children, you won't be disappointed in the feel good nature of this one.

I can remember loving this as a child, and so when I discovered that my mum had picked this up on DVD I was most happy with that fact.

David is a young eight year old boy, who one night is sent to bring his little brother home. Whilst on his way home something happens, when he wakes up he returns home to suddenly find his family is no longer living there, he has lost about ten years of his life, but not aged a second. He ends up finding that he is connected to a mysterious spaceship and is now on the run from the government and desperate to return back to his own time.

David is wonderfully acted, both so naive and young but so old at the same time, suddenly thrust into a strange world full of things he doesn't know about, like robots and wondering if you can still buy McDonald's (I think they will be around forever). The ship is fun, the voice is wacky (Pee Wee Herman anyone....) and is a little blast to my youth on its own. I watched this recently with my six year old and four year old when they were both sick and they really loved it, wanting to watch it another two times.

This is a fun movie and just goes to show that you don't have to jam pack a movie full of action to intrigue a young mind.

It has been five years since the disappearance of Katie and Hunter, and a suburban family witness strange events in their neighborhood when a woman and a mysterious child move in.