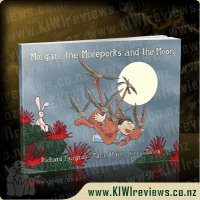 Disclosure StatementFULL DISCLOSURE: A number of units of this product have, at some time, been supplied to KIWIreviews by Beyond Reality Media or their agents for the purposes of unbiased, independent reviews. No fee was accepted by KIWIreviews or the reviewers themselves - these are genuine, unpaid consumer reviews.
Available:
October 2013

Morgan, the Moreporks, and The Moon. product reviews

The Moon? That didn't seem right to Morgan. No one was called 'The.'

This is the story of Morgan's quest to learn the name of the Moon.

My nearly two year old son absolutely loves books and will have several read to him everyday, if you sit down the first thing he will do is bring you a book and snuggle up for a cuddle and a story. We just can't get enough of books in this house and I absolutely love being able to read him stories with some sort of NZ theme or element. I was drawn to this book because of the Moreporks, I love NZ birds and as we live rural we often hear the Morepork call at night time.

I love the cover of this book a lot. It has the character Morgan being carried through the sky by a crew of Morepork, over the Pohutukawa trees and towards the Moon! The illustrations in the book itself are very cool too. Some of them have been done in a comic strip type manner and all have a definite humorous nature. The pictures are very cartoon like so the comic strip is pretty fitting really, with all the spoken parts being put in speech bubbles.

I thought this is quite a good way of introducing and exposing children to different book formats as you don't really see a lot of comic books these days. When I was younger I always found comic books quite hard to read as they would have the written part of the book and then the comic strip and I never knew what part to read first but this is done so it all flows and makes perfect sense with the order.

The story is of a young boy 'Morgan' who is always asking everybody, anybody, and anything in fact what their name is, so when he asks the Moon and does not get a reply he becomes very curious. When he doesn't get an answer from his Dad he decides the only way he can find out is to climb up high in the sky and ask the moon himself. He gets a little help from some friendly Moreporks and is in no time high enough in the sky to be able to ask the Moon his question.

Of course he gets his answer but that is not shared with us, so will leave readers questioning what it could possibly be. Would be good in a school setting to have children researching names of the Moon such as different cultures names for it. I must admit I was hanging out to find out what the Moon would say but wasn't too disappointed with the ending!

My son did enjoy this book and we have read it a couple of times, but he seems to be enjoying the rhyming type stories at the moment so we read those over and over again. Still a good addition to our bookshelf which will be good to show him what a Morepork is. I think it is a rather cute book :)

Britta of Del wants nothing less than to be the new Apprentice Trader of the Rosalyn fleet. Family and friends and even the terrible secret of her parentage will not stop her. But how can she succeed when her true identity must surely be guessed by Trader Mab, who knew her father, and the crew of the Star of Deltora? Relying on no more than her wits and the kind acts of friends she makes along the way, Britta is drawn closer and closer to her terrible destiny.

An exciting, magical tale peopled by monsters and supernatural beings.