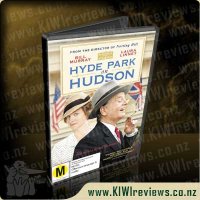 Disclosure StatementFULL DISCLOSURE: A number of units of this product have, at some time, been supplied to KIWIreviews by the company for the purposes of unbiased, independent reviews. No fee was accepted by KIWIreviews or the reviewers themselves - these are genuine, unpaid consumer reviews.
Available:
now

In June 1939, President Franklin Delano Roosevelt (Academy Award nominee Bill Murray) and his wife Eleanor (Olivia Williams) host the King and Queen of England (Samuel West and Olivia Colman) for a weekend at the Roosevelt home at Hyde Park on Hudson, in upstate New York - the first-ever visit of a reigning English monarch to America.

With Britain facing imminent war with Germany, the Royals are desperately looking to FDR for support. But international affairs must be juggled with the complexities of FDR's domestic establishment, as wife, mother, and mistresses all conspire to make the royal weekend an unforgettable one.

I was really excited to get this film to review, I love historical drama and was hoping I wouldn't be disappointed. I knew it received mixed reviews when it came out but I was determined not to let this throw me.

To begin with, I think that you need to have a bit of historical insight into the film as my partner had no clue as to who was who, what they were meant to be doing - basically he couldn't pick the story line up. I however could and it flows quite nicely despite not being 100% accurate. But i'm ok with that as its a film, not a documentary and I also enjoy historical fiction which I could have easily read this had it been a book.

I must say that I LOVED the period costume, it was fantastic. So authentic it just took me back and drew me in. The buildings were fabulous as were the gardens and scenery that was included. I honestly cannot fault any of it.

The acting was hit and miss in my opinion; Bill Murray I thought did an excellent job and his relationship as President Roosevelt with Samuel West who plays King George VI develops really well. Personally I like how they connect on a personal level with their own traits that they have hang ups about it. I find it was really moving seeing to grown men bond in the study over this. I however felt the female roles let the overall essence of the film down, they appeared not as convincing in their inter-relationships with other characters.

After watching the film, I did a bit of research about the background and was interested to see that it was based on letters and dairies found of Daisy Suckley, the cousin and mistress of President Roosevelt.
Overall it did drag out a bit with not much happening at times which I found myself slightly distracted by my cell phone! But it was definitely worth watching, although I'm not sure I would re watch in a hurry.