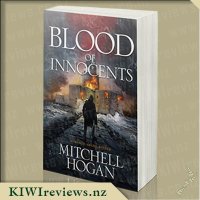 Disclosure StatementFULL DISCLOSURE: A number of units of this product have, at some time, been supplied to KIWIreviews by HarperCollins or their agents for the purposes of unbiased, independent reviews. No fee was accepted by KIWIreviews or the reviewers themselves - these are genuine, unpaid consumer reviews.
Available:
March 2016

Anasoma, jewel of the Mahruse Empire, has fallen. As orphaned, monk-raised Caldan and his companions flee the city, leaving behind their hopes for a new beginning, horrors from the time of the Shattering begin to close in.

With Miranda's mind broken by forbidden sorcery, Caldan does the unthinkable to save her: he breaks the most sacrosanct laws of the Protectors. But when the emperor's warlocks arrive to capture him, Caldan realizes that his burgeoning powers may be more of a curse than a blessing, and the enemies assailing the empire may be rivaled by more sinister forces within.

And soon, the blood of innocents may be on Caldan's own hands.

Now that the reader has been introduced to Caldan's world, we get the opportunity to explore some more of the interpersonal relationships, especially those forged under pressure and out of necessity more than by choice. This sort of situation brings about some very different dynamics, as any soldier will tell you. Having experienced a small fraction of this kind of thing during the years I was with the St. John's Ambulance crew on a military base, I can tell you it was handled beautifully in this book. All the subtle doubts and nuances were addressed, if not explicitly then at least indirectly by highlighting some of the behaviours that result from them. It was a masterful piece of work on that front.

The evolution of magic, showing how the 'accepted' methodology - "energy flows through things to make magic", a single-layer effect - was only the most basic interpretation of the forces involved, and could be evolved to something akin to a solenoid or an electrical transformer - "a small packet of magic can be shaped into a conduit for larger forces, insulating the thing from the high energy that would otherwise burn it out" or a two-tier effect - which is why the rogue forces, and the Emperor himself, can wield such massive powers without exploding. This then begs the question... "can you use a small talisman to act as a tool to shape a larger force into a conduit for even more massive energies?" A three-tier effect if you will. I shudder to think of the world-shattering forces this could bring about!

Caldan is, as expected, the main protagonist in this tale too, but the spotlight also spends a lot of time on the experiences surrounding Magistrate Vasile and his time with Aidan and his band while they decide whether to work with the strangers led by Gazija, as well as Lady Felicienne as she attempts to deal with things in the beleaguered city of Anasoma by enlisting the aid of the Five Oceans Mercantile Company, or what's left of it that is. While this, effectively, makes this book a three-in-one, it is handled cleanly and there aren't any great jarring scene-jumps. We are given a smooth, 'big-picture' of events across vast distances and see how they begin to converge towards an epic, or apocalyptic, battle to come.

Overall, I was as impressed by this book as I was by the first, truely an epic way to announce yourself to the world of fantasy readers. If this is the calibre Hogan plans to keep with as the tale unfolds, I anticipate great things to come, and he has made me an enthusiastic fan of the fantasy genre - something I thought I would never be. That said, and I mean this as high praise - this story reads almost as sci-fi in places, and that, I think, is why I have become so enamoured by it.