King of the Zoo review 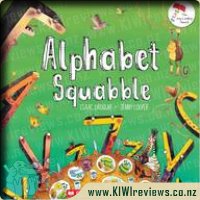 Join the rowdy alphabet squabble and find out. In Isaac Drought's delightful story, lowly letters learn to stand up to the loud and proud!

•  Winner of the 2012 Joy Cowley Award
•  A cleverly told, humorous story that celebrates acceptance of each other despite our differences
•  Charismatic, energetic, 'surfie' author who relates well to children
•  The story introduces some interesting new vocabulary

I received a copy of this book recently. I had seen it advertised around and read the recent reviews on KIWIreviews with great interest. The first thing you notice about this book is the glossy cover. It is a muted but deep yellow/green colour with lots of cartoon letter creatures on the front. The F looks particularly angry or mean. There is a meal set at the table for the X, Y and Z characters.

The book tells us that there are very popular letters in the alphabet and then there are the X, Y and Zs. I love how wordy this book is, and how well the verses flowed. It's not rhymed but it has a jumping flow that worked well when read aloud. The illustrations continue in the same cartoon style. It reminded us of a few shows that Miss6 likes to watch on TV so nice and familiar feel. I can imagine that smaller children might be a little timid about the teeth on the F character though.

When the author is naming a letter, then for that following prose the words that start with that letter is highlighted by a 3d font. That was pretty cool, and made the words pop for my daughter. Towards the end the words that X, Y and Z find are really interesting and I loved that they are explained to the reader.

The wrapping up of the story was brilliant and very satisfying for us. My daughter was happy that they got "a party". I was happy that the concept of Xenophobia was introduced to her and we could talk openly about what that was, and how it would feel. This is a great book, especially for someone who loves language like me!

We have had this book for a week now and it is a real hit with my children. Miss Six and Miss Five enjoy listening to and reading it but Miss Two just loves it. It has become one of her "must reads" before sleep and we often have to read it two or three times. She really loves the illustrations and spends a lot of time going through each page naming everything and telling me who the children are and who the mummy's and daddy's are!

The story itself is very cleverly written and demonstrates very powerfully how discrimination occurs and the damage that can cause in a way that children can understand. I really love that the author hasn't shied away from using a word such as xenophobia and think that this is a great book for my girls to read to be learning the meaning of the word. We have had many interesting discussions after or as we read this book and it has certainly been helpful in providing a context in which to explain what can be an incredibly emotive topic.

The illustrations are so beautifully and wonderfully done and we all love them. I really like how the grown ups are the capitals and the children are the lower case letters but also how the illustrations depict all the letters as having different personality's. We all found the capital F to be very fearsome and frightful which was a good platform to talk about how often those that are bullies can appear that way.

I can't recommend this book enough. It is a brilliant book with a very cleverly delivered message that all our children should learn about and understand. A book well worthy of the 2012 Joy Cowley award and well worthy of gracing your book shelf.

With my eldest daughter starting school this week Alphabet Squabble was perfect for her. It was also her preferred book from the stack I was given to review. This is not your usual alphabet book, instead it is about x, y and z being the unpopular letters and thinking of words that start with these three letters.

As a former new entrant teacher and now the parent of one I was pleased to see both upper and lower case letters featured in this book. The way it is illustrated it appears the upper case are the parents and the lower case the children. The one thing I didn't like was that on one page the F is reversed. This creates confusion for children learning the letters.

I was able to use this book to discuss with the children the initial letters and sounds of the animals and other things. This is great considering I have two care kids that are 4.5 as well as my new entrant daughter all who love talking about letters. The kids really loved that the letters had arms, legs and faces which made it more fun. My daughter wants to take this book to school to share with her class. I am sure they will love it too.

Bart Minnock, founder of the computer- gaming giant U-Play, enters his private playroom, and eagerly can't wait to lose himself in an imaginary world, to play the role of a sword-wielding warrior king, in his company's latest top-secret project, Fantastical.

The next morning, he is found in the same locked room, in a pool of blood, his head separated from his body. It is the most puzzling case Eve Dallas has ever faced, and ... more...