The Best of 'Not the Nine O'clock News' - vol 2 review

ProdID: 433 - Out of Time
Directed by Carl Franklin 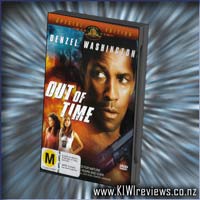 Disclosure StatementFULL DISCLOSURE: A number of units of this product have, at some time, been supplied to KIWIreviews by Roadshow (NZ) Ltd or their agents for the purposes of unbiased, independent reviews. No fee was accepted by KIWIreviews or the reviewers themselves - these are genuine, unpaid consumer reviews.
Available:
19th November 2004

Out of Time product reviews

OK, the gripe must come first, just like the event it's about. When DVDs were first making an appearance on the home-entertainment-media scene, one of their biggest drawcards was that you could, if you wanted, CHOOSE to see the trailers and previews of other movies, by selecting it from the menu of options. There was no 'fast forward past the previews section' on DVDs... until now.

Yup... enforced previews. No-skip-allowed, no shortcut-to-the-menu either, but they will at least allow fast-forward... 'Pieces of April' heads the charge, 'Jeepers Creepers 2' jumps in next, with 'Agent Cody Banks 2' sneaking up in third place. Then, freedom, we see that oasis in the distance... the main menu. Gripe over, movie time.

What happens when the local Chief of Police is having an affair with a woman who has just died, murdered perhaps? And the more the case gets looked into, the more evidence points square at him. And what do you think happens to him when his ex-wife is assigned as the investigating Homicide officer? Chaos, deception, adrenaline-rush dramatic sections, and a plot with more twists than a celtic cross.

Shady Cop: Denzel Washington... very convincing in the role. You could easily see when the character had one of the many "Oh crap, I'm dead now" epiphanies, and it made for sympathetic moments of guilt in me as a viewer! Bad Guy: Dean Caine, a complete switch from his more regular role as the super side of Lois and Clark. That man has a lot of anger issues to deal with... and a very nasty taste in women. The fem fatale was played by Sanaa Lathan, who's probably only memorable role was as 'Mum' to the Daywalker himself, Blade. She's a good actress, but she's in danger of getting typecast as 'nasty woman with chronic case of switch-sides'.

Overall, with plenty of 'oh hell...' moments, a sprinkle of short-term cliffhangers galore, throw in a final set of supportive twists from the most unlikely sources, a dash of insight into Middle-American Law Enforcement, and you have a surprisingly good movie! This one will be a keeper for playing to those 'who have seen everything and find thrillers dull.'