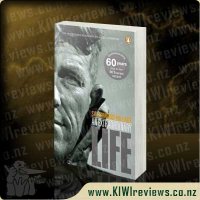 Disclosure StatementFULL DISCLOSURE: A number of units of this product have, at some time, been supplied to KIWIreviews by Penguin Random House or their agents for the purposes of unbiased, independent reviews. No fee was accepted by KIWIreviews or the reviewers themselves - these are genuine, unpaid consumer reviews.
Available:
April 2013

This intimate and inspiring book tells the full story of Sir Edmund Hillary's extraordinary life, from his expeditions to remote corners of the world to his humanitarian activities serving the Sherpa people.

Drawing on Sir Ed's personal archives, it is a portrait of a revered yet modest man who lived life to the full - surviving personal tragedies as well as achieving historic triumphs, earning worldwide fame and displaying tireless philanthropy.

Ranging from the roof of the world to the frozen extremes of the South Pole, Sir Edmund Hillary: An Extraordinary Life is a fitting and revealing tribute to a great man.

Originally published in 2005. Re-released in 2013 to commemorate 60 years since the first Mt Everest ascent.

Like every Kiwi I have grown up hearing about the great Sir Edmund Hillary. I have watched a few documentaries on him but until now I haven't read a biography. When this book came available for review I leapt at the chance to read about the man appears on our five dollar note.

I was very pleased to see that Alexa Johnson wrote this. She is well qualified in so many ways. Firstly she is a friend of the Hillary family, so this allowed her insight into his life as a family man. Secondly she was the guest curator for the Auckland War Memorial Museum's exhibition about Sir Ed, the whole book was well researched and referenced. Finally as a New Zealander she understood our affinity with the man.

When I started reading it I wondered what I was in for as the first chapter covered his family history. Thankfully after this his book moved along swiftly. By chapter six he had conquered Everest so the book was able to cover his other expeditions around the world as well as his family life and humanitarian work. This man lived a very full life. Most of us would be proud just to have done what he did in a chapter or two.

Perhaps it was because this was written by a woman or maybe it is because I am a wife and mother (probably both) but I really found myself sympathising with his wife Louise for the sacrifices she made to allow her husband to fulfill his dreams. She was portrayed as a very supportive wife and lengths she went to showed her dedication to his humanitarian work.

While I was reading this I found myself laughing and crying. I could feel the excitement when Sir Ed and his team achieved their goals and the disappointment when they didn't. There were some very funny quotes from both Sir Ed and others that had me chuckling. I also wept when he lost so many people that were close to him. I learnt about the great Sherpa people and how they were so much more than mountaineering porters.

The one thing I was disappointed with this book was that it wasn't updated for it's re-release. In the eight years since it was written a a major event occurred in Sir Ed's life, he died. This makes the book seem dated when it refers to him still doing something. It would have been great to have an epilogue or similar.

Reading this biography has reaffirmed for me that Sir Edmund Hillary deserves his status in New Zealand history. Everyone in the book (from every aspect of his life) speaks very highly of him and his feats are nothing short of incredible.

Mystery arises around the identity of Aden Weaver's father. Is Aden really the son of Kal? When Chief Wako, the scorpion shape-shifter and leader of the criminal Sasori Empire, gets his clutches on the Or'in of Tane, Aden and his friends - now members of the Order of Twenty-four - leave the Lost Island. ... more...