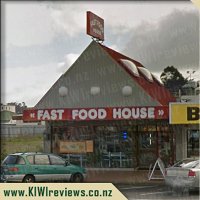 We are located in Kimbolton Road, in the heart of Friendly Feilding.

We serve a wide range of foods, including burgers and asian dishes.

Eat in or takeaway.

On my way home one evening, after running late, I decided to go to The Fast Food House in Feilding, for some takeaways for tea. I had heard several things about them (some good, some bad) but decided I would judge for myself. On entering the shop it was well lit and seemed fairly welcoming, however when I approached the counter to make an order I was suprised to see two young boys staring up at me. The older of the two, who looked as though he was about 8 or 9 at most, jumped on a stool and began to take my order. He was very polite but while trying to serve me kept getting interrupted by the preschooler.
Eventually I gave my order and waited patiently for my meal. There were several tables that needed cleaning and I noticed where the food was being prepared did not look the cleanest, I looked for some sort of health rating but could not see one.
I ended up getting an order of two chicken, cheese and bacon burgers, two fish burgers and fries. The fries were crunchy and nice tasting and I had no complaints from my kids. Unfortunately the chicken in two of the burgers was not so great. The fish in the fish burgers were tiny 'fish bits' in batter, they tasted okay but were not big enough to be filling. The chicken, cheese and bacon burgers had tiny chunks of what I can only presume was chicken was thrown on and looked and tasted old. The lettuce was soggy and brown and the bacon was almost non-existent.
The price of the food was fair but I would have rather paid a bit more for good food. I really wish I had something positive to say and the only thing I can think of is that I have been told that there may be new owners now.

Decided to get dinner in Feilding after a concert at a nearby school. Stopped in at the 'Fast Food House', which is situated on Kimbolton Road. The inside is brightly lit, has a few game machines, and seats and tables for people to sit and eat.

Fast Food House has an extensive menu. It is, in essence, a fish 'n' chip shop. They serve all the usual deep fried foods, along with the more unusual such as chicken chippees. They also serve asian dishes, asian smorgasboard, burgers, soft serve ice creams, sundaes and milkshakes. All burgers are also available in a combo, which includes small fries and drink. There are many kids combos available too. They also serve fried chicken, which is available by the piece or in combo packs with chips.

I would have liked to sample their asian smorgasboard, but unfortunately by the time we got there (8.30pm), the smorgasboard looked a little worse for wear. There was not a lot on offer, and what was on offer did not look appetising. Fair enough though, as it was getting late.

So instead, I ordered a chicken bacon & cheese burger and small fries. Unfortunately I was overcharged by 15 cents - NOT a good look in my book. To make matters worse, another person was also overcharged while we were waiting for our food.

After about five minutes (impressive minimal wait time), my food was ready. Now judging from the colour pictures which they have on their menu displaying the burgers, I was expecting a burger which contained a thick crumbed chicken patty/fillet. Instead, what I got was chicken which had been pulled off the leftover chicken pieces which I am guessing had not sold. A bit of a let down, as it was not what I was expecting. The bacon was not real bacon - it was ham. This aside, the burger was pretty tasty, albeit on the small side, and had a good slog of mayo. Average.

Fries were crinkle cut, and served in a bag which turned transparent with grease. I found them to be extremely salty - and this is coming from somebody who LOVES salt. Not too bad however, fries are fries after all.

I will let you decide if you would like to dine there, I know I will stick to KFC or McDonalds in the future.

Introducing UNCLE TOBYS Le Snak of the World, an adventure for your taste buds as we go around the world with great new cheese flavours.

The cheese has been flavoured to taste like famous foods from around the world. Enjoy scooping your lightly herbed biscuit into the new cheesy flavours!

UNCLE TOBYS Le Snak is made with the goodness of real cheese, wholemeal crackers and contains no artificial flavours or colours.