The Keepers - 1 - Museum of Thieves review 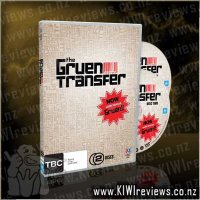 But wait, there's more! Extras include extended versions of the Road Safety and Bank conversations, our own Gruen adverts, unseen Wil riffs, and six of our favourite, never shown on TV, segments tearfully cut from the original shows. And if that's not enough, this DVD may also reduce the appearance of fine lines and wrinkles and is 98% fat free!

To those familiar with the TV advert shows, where we get a chance to see the funniest adverts from around the world, this will have a fun feel to it. Being an Australian show, the adverts are mainly restricted to ads show on Aussy and NZ screens, with a couple of others thrown in to illustrate certain points.

There are some brilliant twists, such as the "selling the unsellable" section in each show, where something fundamentally unappealing is put to two ad agencies who try to put together a sales campaign to turn it around and make it sound appealing and desirable to consumers. In many cases, I was howling with laughter at the approaches taken, and finding some of the ads strangely appealing.

The definite pro-Aussy stance is toned down by the occasional addition of a Kiwi ad exec on the panel, but it really is a strongly Aussy-centric show. That's not to say they are overtly anti-Kiwi at all, far from it in most cases, but this show will be an 'acquired taste' for some who can't look past the Oz Flavour liberally sprinkled over it all.

Overall, I found it a wonderfully entertaining show, and if I thought for a second NZ could do as good a job I would be clamouring to get TVNZ to try it... as it is however, I think this is as good as we're going to get without it devolving into either a "Commercial Breakdown" style show, or worse, a gameshow-esque version of "AFV".

As the Apocalypse grows closer, threatening to turn Earth into a battlefield soaked with human blood, Sam, Dean and Castiel struggle agains daunting odds. New foes arise, including the Four Horsemen of the Apocalypse. Old friends depart, consumed by the fearsome wrath of Hell. Through it all, the Winchesters are targeted by demons and angels alike, who warn that each brother has a special and terrible role to play in the coming devastation. ... more...