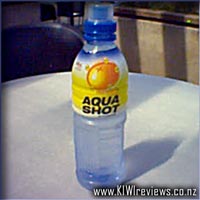 Price:
$1.79
Available:
at Countdown and other retailers

If you want to grab life's opportunities, you need to be on your game.

Aquashot is active water with a refreshing burst of fruit flavour and the boost of 5 essential vitamins, making it the tastiest way to keep hydrated, so you'll never miss a shot.

I am not a big water drinker although I know I probably should drink more it is just I like my drinks to have some taste! I bought a bottle of this thinking it would be nicer than normal plain water but I wasn't a big fan.

Although the added taste of mandarin gave the water a bit of flavour I guess it just wasn't enough for me. It tasted to me like you had left a small trace of juice in a bottom of a glass and then topped the glass up with water, so it was really diluted juice flavour. I am not really sure what I was expecting because I guess at the end of the day it is supposed to be flavoured water not juice so the taste is probably spot on really.

The price is the same as normal bottled water so you do get good value for money, and I find these flavoured waters are quite good for my daughter when she goes on trips with school. She like me probably doesn't drink enough water but I know when I send one of these she will drink more than she would if it was just plain water, plus with the added sugar gives her a bit of a boost when she goes on a hike.

Not my favourite choice of water but I do like trying out new things so when I saw this range of water in the shop I thought I would give it a go....I prefer drinking water when I am out walking or exercising as water hydrates me quicker and is easy to drink. I enjoy eating mandarins and the juice they produce naturally it is very tasty so I thought this combination would be a hit.

But the water I drink tasted very weak, and with the water still being clear like water it must have been an artificial flavouring and I didn't enjoy the taste at all....I was very disappointed! The water was cold and refreshing with a hint of something in the water but if the label had been removed I would not have been able to tell you what I was drinking. Nowhere in the bottle of water did I taste mandarin at all.

I don't like drinking from sipper top bottles I prefer unscrewing the whole lid and drinking from the neck of the bottle. So it would be nice as an option to have a bottle with the sipper top and one without for people who don't like them....in my experience the sipper top never stays open or only allows a small amount of liquid through and when you have a thirst to quench I want a decent amount of liquid coming through quickly.

One thing going for this product is the amount of water I get for my money...it definitely hit the spot when I needed a drink and did last while I was out walking, but it just let me down taste wise.

Because I didn't like this flavour and once bitten twice shy I wouldn't go out of my way to purchase another bottle of this flavour or the other flavours made by the same manufacturer.

I dont tend to drink bottled water but sometimes im caught short and need a drink. So bottled water is the one I go for. Aqua shots and the mandarin flavour is far best my favourite. It has such a great taste to it, and with it being water its good for you. The flavour comes though as a burst of freshness just like the bottle says. The best thing I like about it is the price you cant beat that, something that good in a bottle will get me going back every single time.

I never get a bad after taste in my mouth if anything it makes me want more and more, I dont tend to have it around long before it goes so it never had time to go cold. I do have to admit I have brought and drunk as room temperature and i cant say I liked that too much, the colder the better for me. Buying a few and sticking them in the freezer works really well too.

Portion size is good, not too much in the bottle so when u get to the end its not warm.
Im not too keen on the Mandarin flavour but I gave it a go, I much prefer the lime. I think all bottled water is a bit expensive considering they get it from natural springs.
I drink a lot of bottled water, and Aqua shot is the 1 I buy most of the time :)

I have always been wary of bottled waters, simply because I have always felt that you can never be 100% certain exactly what is really in them. However, over the years as pollution has made it's influence clear in our natural water system, purified bottled waters are an ever-increasing necessity in modern life.

So, it was with mixed feelings I bought this bottle. I have tried other flavoured waters before and found them to be tepid at best. Weak flavour in otherwise totally bland water with just a delicate hint of warm plastic. Ewww!

Popped the top, took a slug. First impressions: I hate the sipper cap! It won't 'click' into a locked-open position, meaning that if you suck too hard, it will close up on you! Possibly taking a pinch of your lip or tongue with it. OUCH!

The water itself was, however, very flavoursome. A good strong tang of mandarin, drowning out any possible plastic taste. A good 800ml dose made it good value for the $1.79 I paid, but it could get expensive if you follow the recommended daily dose of up to 6 bottles a day!

My only gripe with it was that it gave me some nasty acid-stomach... which I usually only get after 6 or more cans of Lift+ within 2 hours... a rare occurance. I can only assume that is was something to do with the apple cider vinegar (vinegar?!).

Overall, not bad, but the acidburn has put me off wanting to have many more of these in the future.

The Coca-Cola Company has released several flavor extensions of its signature brands -- from cherry Coke ® to Diet Coke with Lime ® -- in markets around the world. Many New Zealanders enjoy adding a shot of raspberry syrup to their Coca-Cola in convenience stores and quick-serve restaurants, and the Company has taken ... more...