« Best of French and Saunders review

The Young Ones - Series One review 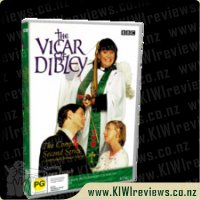 In Series Two, romance is in the air when Geraldine plays Cupid to Alice and Hugo, and then, when she least expects it, is struck by Cupid's Arrow herself. Meanwhile, the parishioners of Dibley delve into the murky world of the media by setting up their own radio station. Features the episodes: 'Engagement', 'Dibley Live', 'Celebrity Vicar' and 'Love And Marriage'.

Dawn French is one of my heroes. I probably enjoy her comic timing and delivery more than Jennifer Saunders. So when I saw that she was going to be in something by herself, I was keen to see it. The Vicar of Dibley is a great BBC comedy about a female Vicar who rocks into a small village full of crazy but lovable characters and then has to prove her worth. Its written by Richard Curtis, who made his mark for me with Blackadder.

The second season of the Vicar of Dibley has more of the same funny characters. Obviously my favourite character is Geraldine (French). Coming from a religious background, I also really appreciated her approach to things. It gave me a sense that being open-minded and caring even if you are a little disturbed by things, was actually fine.

Hugo and Alice as characters were kind of awful, but you couldn't help liking them as a couple even though they were so incredibly thick. This season really focuses on them and their engagement and wedding. I think Alice just grated on me the most because she is so vacan't and I hate seeing females presented that way. But at least she was balanced with more intelligent ladies. I did really enjoyed Hugo's father's reactions to the growth of their love and the engagement announcement.

Score: 9.3
Product reviews for listing 627: The Day of the Triffids -  Type of Show: Sci-fi Thriller

Following the earth's close encounter with a comet, a meteor shower strikes Britain's population blind. Bill Masen, recovering in a London hospital from a vicious attack from a new species of plant, is one of a few to survive with eyesight intact. The world he emerges into has already terrifyingly ... more...