« You Are Not Here review 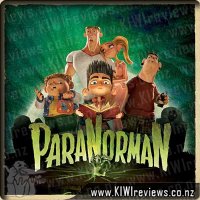 Disclosure StatementFULL DISCLOSURE: A number of units of this product have, at some time, been supplied to KIWIreviews by Hoyts NZ or their agents for the purposes of unbiased, independent reviews. No fee was accepted by KIWIreviews or the reviewers themselves - these are genuine, unpaid consumer reviews.
Available:
in cinemas from 17th January 2013

In the town of Blithe Hollow, Norman Babcock is a boy who can speak to the dead, but no one besides his eccentric new friend, Neil, believes his ability is real. One day, Norman's estranged eccentric uncle tells him of an important annual ritual he must take up to protect the town from a curse cast by a witch it condemned centuries ago.

Eventually, Norman decides to cooperate, but things don't go according to plan. Now, a magic storm of the witch threatens Blithe Hollow as the accursed dead rise. Together with unexpected new companions, Norman struggles to save his town, only to discover the horrific truth of the curse.

With that insight, Norman must resolve the crisis for good as only he can.

This was an interesting one. Effectively a Zombie movie for kids. Well...not for the really young ones, but this is definitely a zombie movie aimed at a younger audience. This is pretty much a successful Scooby Doo movie.

With the usual misunderstood main character, this film does the usual dance of adding every stereotype in that it can think of, then creates a scenario where they all bring about conflict until there is something that makes them work together. Typical children's movie, teaching tolerance. But in actual fact it actually went a lot deeper.

For once, the characters were trying to find a non-violent solution. Realising that the cause is not necessarily the cause, but actually a symptom of something else (can't you just smell the vagueness of it all?). I quite enjoyed the different stance that this film took, and the comedic parts chucked in, always kept it light (despite the evil dead zombies).

Very cartoony animation, but that was clearly the aim, and it helped focus to remain on the plot, rather than creating a thriller/horror where you 're just waiting for the deaths of the characters. A plot-driven zombie film for kids. You can't really get any more unique than that.

Norman is a not so average young boy who can see the dead (I see dead people.... couldn't help myself) with a very typical family.

Norman can see ghosts, he chats to them, is seen as an outcast, his family don't understand him and so he really only has one friend and no one on his side. He ends up finding out about a curse which has brought the dead back to life, aka. zombies, and he is the only one who can stop it. The characters, outside of Norman are nothing special, but I did love that the most stereotypical character comes out with a line you aren't expecting.

The storyline was good, not really anything you can't find in other movies, but the movie is still fun, my son loves Monster House so I would probably let him watch ParaNorman this year, might even get him it for his birthday as I know he would love it. I really enjoy movies that use claymation, a lot of work goes into it, so the special effects for this get a double thumbs up from me. The voice acting is really well done and I think everyone did a great job.

Norman is your average, yet out of the ordinary social outcast. He doesn't fit in at school and his family just doesn't get him, but he has a special gift, he can see ghosts.His family are nothing out of the ordinary, his older sister hates him and finds him annoying, his mum and dad donâ ™t understand him and Grandmaâ ™s ghost loves to chat.

I'm a fan of claymation films as so much effort goes into them and they look unique without looking too unrealistic. Thereâ ™s a really good range of special effects up for grabs here and all add to this delightful movie.

My husband and I watched this on our own, as I wanted to view it before letting the kids watch it. While we both really enjoyed it we both agreed that my eldest might find it a little scary so weâ ™re probably going to wait till next year to let him watch it as I think he may be OK by then, and if not, well, Iâ ™ll watch it again and it can hang around till we think heâ ™s ready to watch it.

This movie is lots of fun and I was really delighted to have a very stereotypical character surprise me at the end, which provided a great laugh and hopefully something that happens far more often in movies without any fuss. IF your child loves zombies then theyâ ™ll enjoy this, but I would suggest that you watch it once before they do.

This was a fun family movie, though probably not suitable for the really young ones. Still, the animation was great, the storyline had some very cute moments, and there were some great messages about bullying and judging people by a narrow set of standards instead of accepting them for who and what they are scattered throughout... but I still walked away feeling that the movie could have been a lot more than it was.

With a great array of vocal talent, the flaw wasn't with the actors, but more in the somewhat confused styling of the movie, for me. It seemed to be like an animated attempt to do Tim Burton's version of "The Sixth Sense" with a hint of "Walking Dead" and a light sprinkle of "Frankenstein's Monster" near the end... and it really didn't quite fit together quite right... kinda like that pair of pants you think looks really cool, but they're just a bit too tight around the thighs to be pleasant to wear.

The main characters of note are, obviously, Norman - a young boy with the ability to see and communicate with the dead, Neil - the token 'fat kid outcast' who is probably Norman's only real friend, and a bunch of bullies - of all ages - who basically make Norman's life utter living hell. Oh, and a strange ranting hobo who claims to have been protecting the town from an evil witch's curse, and also quite possibly Norman's Uncle.

Throw in a handful of zombies, a cast of ghosts, a town full of sceptics, and a drama teacher who is so full of.... erm, herself... that she borders on intolerable, and you have a motley crew who's jobs seem to be at total cross-purposes. Really, I spent more time trying to figure out what the heck the writers had been thinking than I did actually enjoying the movie.

Overall, though it wasn't the greatest movie, it still provided a pleasant way to pass an hour and a half indoors out of the sweltering heat. I don't think this is one I would bother to buy it on DVD, but if it came on regular TV it would be worth plonking the older kids down in front of, or maybe hiring it from the video store if you want to see it sooner. However, I can easily imagine this would be quite impressive on the big screen in 3d.

We were very keen to see ParaNorman the moment we heard about it. My daughter loves movie monsters (in a children's movie setting at least!). We enjoyed Hotel Transylvania, Frankenweenie and even the Zombie character in Wreck It Ralph. The trailer to ParaNorman was exciting and funny and my daughter and I were looking forward to some Zombie fun. She even has a tee-shirt with a zombie on it, so she is aware of what they are, what they eat (BRRRAAAIIIINNNNSSSS) and how they shamble around.

For some reason though, ParaNorman got under her skin. Its shot in clay-mation style so its not exactly realistic. And certainly no more realistic than Frankenweenie. Maybe it was because it was in colour. Maybe it was because she is more aware of death these days. In any case, as the movie progressed she asked a few questions for confirmation or reassurance. By the time the curse got underway, she was in my lap. Her heart was racing and she was shielding her face. Of course she didn't want to leave, she was just really unsure about what was happening on the screen. She is nearly 6 years old and I just think another year or two and it would have been more appropriate.

The scary stuff doesn't really last all that long, and there is plenty of comedy, especially silly slapstick that made her laugh a lot in spite of herself. Eventually she even went back to her seat. For me it was definitely a PG movie. There were some jokes that I choked on - very funny but I was also hoping my daughter wouldn't ask me what it meant. I also noticed that the parents behind me were also having to say a few reassuring things to their slightly older children as well. Overall it was my type of monster movie (I hate horrors) but it is aimed at a slightly older age group than my daughter as well. It was a bit too believeable for her.

In this enchanting film adaptation of J.K. Rowling's delightful best seller, Harry Potter learns on his 11th birthday that he is the orphaned son of two powerful wizards and possesses magical powers of his own. At Hogwarts School of Witchcraft and Wizardry, Harry embarks on the adventure of a lifetime. He learns the high-flying sport Quidditch and plays a thrilling game with living chess pieces on his way to face a Dark Wizard bent on destroying him. For the most extraordinary adventure, see you on Platform 9 3/4!