« The Race for the Chinese Zodiac review 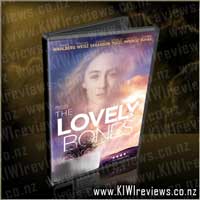 Based on the Alice Sebold best seller, The Lovely Bones tells the story of a murdered young girl, the quest for her killer and her passage into the hereafter.

"These were the lovely bones that had grown around my absence. The connections, sometimes tenuous, sometimes made at great cost, but often magnificent., that happened after I was gone. And I began to see things in a way that let me hold the world without me in it." The Lovely Bones follows a young girl who has been murdered as she watches down, not only on her killer, but on her family and how they cope and survive the loss. This opens it up for a lot of drama and a lot of reflection but at the end of the day it doesn't really deliver upon that, which is a shame.

The acting is good, after all there are some A lister names in this movie, so I wouldn't expect any less from them, however I would suggest to Peter Jackson that he stick with movies that have quite a bit more action in it as the trasition from novel to movie just hasn't done well. The special effects are well done and there are some rather gorgeous moments in it, but they don't make up for the rest of the film which left me feeling a bit let down. A great idea but didn't transfer well into the big screen.

I had read the book The lovely Bones a well before I saw the movie and I really enjoyed the book so I was very excited to see it coming out as a movie. With Peter Jackson directing it and the cast I was expecting it to be a wonderful movie. I hate to say it but I was completely disappointed in the whole thing.

While it started off ok I soon found myself really bored, I felt that Peter Jackson had taken a lovely heart warming story and just tried to do far too much with it. Unlike his other movies it didn't need lots of special effects be there seemed to be quite a bit in it, The CGI he used just ruined the whole thing for me.

The story was a heart breaking tale of the murder of a young girl and her journey to the afterlife. It took you on a journey of every emotion but a lot of that emotion was lost in the movie. While Peter Jackson is a wonderful director normally, I think he really needs to stick to the type of movies he does best with lots of action and special effects. The lovely Bones is one movie I'm not in a hurry to watch again.

I listened to all the hype about this movie and finally got the chance to watch it, i was kind of disappointed. If it wasn't for the fact that i really wanted to know what happened to the killer and Samon, i would have turned it off as i just couldn't stay focused with the movie and i found my attention wandering to other things.

I would definitely suggest that everyone watch it at least once so they can say they have seen it and what they thought but i'm glad i didn't pay to see it at the cinema. I would probably watch it again sometime but not in the near future.

The backgrounds and the story were great and really believable and gave the sense of being there but i feel something over-all was lacking.

Score: 8.9
Product reviews for listing 1848: Alvin and The Chipmunks -  Directed by Tim Hall

Based on the beloved cartoon series, Alvin and The Chipmunks is a family story filled with comedy, heart and exciting music.

After a chance run in with the struggling song writer, Dave Seville, three very special chipmunks, Alvin, Simon and Theodore decide to make Dave's home their own. It's not long before the chipmunks realize in order to convince Dave to allow them to stay they must reveal their talent...not only can they talk but ... more...