The Wheels on the Bus review 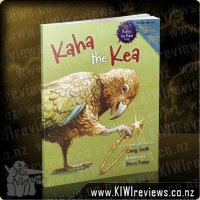 Disclosure StatementFULL DISCLOSURE: A number of units of this product have, at some time, been supplied to KIWIreviews by Scholastic (NZ) or their agents for the purposes of unbiased, independent reviews. No fee was accepted by KIWIreviews or the reviewers themselves - these are genuine, unpaid consumer reviews.
Available:
Local book shop

From the author of The Wonky Donkey and Willbee the Bumblebee, Kaha the Kea is possibly the cheekiest kea in New Zealand, who gets away with everything... or does he?

I love all of Craig Smith's books and own everything he has produced so as soon as I saw Kaha the Kea I just had to buy it. I wasn't disappointed Kaha the Kea is on par with The Wonky Donkey and Willbee the Bumble Bee.

I work in an ECE centre and as soon as I introduced it to the children it was a hit. The really enjoy the humour in the story (of course the bare bottom page is a favourite!) The catchy tune allows them to pick up the story quickly and before long everyone is singing along.

The illustrations also provoke a lot of conversation and at the end of the story there is always a big debate as to who stops Kaha in his track his mum or his dad. I would recommend Kaha the Kea to anyone it is one story you don't mind having on repeat and listening to over and over again.

In the first term of school, my daughter learnt a lot about native birds. She loves animals so this was the perfect introduction to school. We recently went to meet Craig Smith and he read this book to us. Funnily enough before we even got there or knew the new book existed, she was pretending to be a kea. My daughter was lucky enough to stand up the front with him turning the pages of the book!

This book is really neat. I loved all the illustrations. It has the same whimsy of Smith's other books. Kaha is beautiful on each page. The expressions on his face are amazing. You can see how cheeky he is. On each page we get to see the next cheeky activity he is up to. The colours on each page are beautiful, and natural. The other characters are comical as they deal with the latest trick played by Kaha.

The words flow really nicely. Its very catchy after the first page or two. We even walked away from the library making the "kea kea" sound, and that lasted almost all afternoon. In typical Smith style, there is mention of a bottom. Kids love that stuff. My daughter was in hysterics over it and the room agreed wholeheartedly with her.

This book was such a big hit with my girl that she has requested it for Christmas. If you have the Wonky Donkey and Willbee on your shelves already, I recommend this book. If you have not yet had the pleasure of reading Smith's work, this would be a fine starter. It also comes with a CD like most of his work, so at $25 for the book and CD its great value.

We are already the proud owner's of Craig Smith's other publications and his Just for Kids CD too. The Kaha the Kea song is on the CD so we were familiar with it and the kids all love it. I was delighted to see Craig had published it in a book too.

The story is of a mischievous kea's adventures and it is really bought to life by Bruce Potter's illustrations. The facial expressions and body language are fantastic. There is also extras in the pictures that elaborate on the story. When the words and illustrations are combined with the music it is a fantastic great value package.

I took my tribe of home-based carekids to a show Craig Smith was doing at our library recently and he had bought Kaha with him. Kaha was larger than life (human sized) and flapped around the audience. Craig both started and ended his show with this song and the kids all loved it.

This is the most Kiwi of any of his publications to date as it is all about our alpine parrot but also has some Kiwi slang too. I am pleased to add this book to my collection and I am sure that I will be adding any other books he puts out. It is interesting to note that unlike his other books which were published by Scholastic, Craig has chosen to publish this himself. When he signed our copy I wasn't cheeky enough to ask why.

After seeing this on the shelf at the bookshop i just had to have it! Anything from Craig Smith is worth buying i decided, although i was a little nervous as this is the third book round i wondered if it was possible it wouldnt be as good. Im happy to report it definately is!! Kaha the Kea is a very cheeky Kea who flies around causing all sorts of trouble resulting in everyone getting annoyed and yelling at him! Children being children of course thought the guy showing off his bottom from his pants falling down was worth a long laugh.

Dare i say if you dont want to hear the C.D over and over again a million times throughout your day dont let the children hear it haha once they have they will never want you to simply read the book again. So far i think i prefer this better than WillBee the Bumblebee but it certainly doesnt beat The Wonkey Donkey. Fully recommend to others who have children who love these wonderful books :)

Score: 9.0
Product reviews for listing 1837: March to the Sound of the Guns -  Written by Ray Grover

During World War I New Zealand shipped one hundred thousand young men halfway round the world to fight at Gallipoli and the Western Front. Eighteen thousand were killed - a death rate of nearly one in five. Thousands more were maimed physically and emotionally. The men had gone with the encouragement of their families and the blessings of their churches.

In March to the Sound of the Guns five people tell us the story of their ... more...