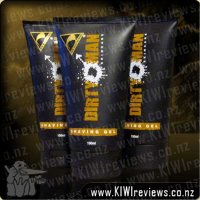 Disclosure StatementFULL DISCLOSURE: A number of units of this product have, at some time, been supplied to KIWIreviews by Dirty Man Skincare or their agents for the purposes of unbiased, independent reviews. No fee was accepted by KIWIreviews or the reviewers themselves - these are genuine, unpaid consumer reviews.
Available:
Via online store and at selected retailers

Big beards are the realm of the old and the weird, don't let yours get out of control.
Our DirtyMan Shave Gel contains Aloe Vera to sooth as you shave and has a special clear formulation for sculpting if you want to explore your artistic side.

We recommend washing with DirtyMan Face Wash before shaving to remove impurities and following up with a great moisturiser- Ours of course.

We have reviewed a lot of shaving gels in our time, so we were interested to see how the Dirty Man gel stood up against the rest. The answer is pretty darn well. This is a clear gel, with a slight fragrance to it. It essentially smells clean, but not overpowering at all.

We found that you don't need to use a lot of the gel to get a really good lather. It is a low sud lather, which is great for shaving and is especially formulated that way according to the pack. This works great for my beardy husband who tries to keep the sides of his face nicely shaved while growing the goatee.

The aloe vera seemed to help soothe any razor burn and the shave itself seemed to be smooth. Of course the razor you use also has an impact. But considering the age of the razor blade used he got a good shave out of this product.

The price seems pretty good, since you don't need a lot to get a good lather. This tube would last a while even with shaving 5 times a week.

Dirty Man Shaving Gel comes in an attractively packaged tube that will look right at home on your bathroom shelf. No noisy, bad-for-the-environment aerosol cans to be seen. Simply squeeze the tube gently and the product comes out very easily. You don't need lots of the shaving gel to apply it adequately on your face.

There is Aloe Vera extract in this shaving gel and you can tell. There's a natural scent and no weird smells that might send your brain an abort message.

The shaving gel doesn't lather up as much as I thought it would, but it's still effective as a shaving gel.

For best results Dirty Man recommends you use their face wash first. I agree with them. I found that after I had used their face wash and shaving gel it was easier to shave.

Good shaving gels are hard to find and those that you like don't always work with your preferred razors and blades. I have tried many of them, and I do like this one.

I use vintage Gillette razors (a 1938 Gillette Senator and a 1958 Gillette "Fat Boy" adjustable and a Merkur Slant for those that are interested) and many modern shaving creams and gels just will not work. They can cause a bit of drag across the skin and leave a bit of barber rash.

Dirty Man Shaving Gel works very well with my vintage collection. It doesn't produce a huge amount of foam (in common with many modern gels) but does give excellent cushion allowing the razor to glide across the skin, and with a good sharpe blade (A Feather or similar) you will get a baby-bum smoothness whether you shave with the grain, against or across the grain. With a splash of water, it gives enough glide to trim any of the bits missed.

The scent is distinctly masculine and combines very well with the rest of the range. I have been using these products non-stop since receiving the products. I'm not sure I have noticed much of a difference myself - maybe it will take a lot more work to get me looking to perfection. I never thought I would use any of of the other products and just thought I would only ever really just use the shaving gel - I have been proven wrong yet again.

Well done to the Dirty Man creator to putting together an excellent range.

This was some of the nicest shaving gel I have used since I took up shaving my face again after nearly 10 years of growing a beard. Last year I took off a decade of facial hair to raise money for charity, and it felt really strange. My Moko saw light again for the first time since my 45th birthday and since then I have kept it open to the sun.

Since then, I have tried more than a dozen different gels, oils and balms, more out of curiosity than any real need or dissatisfaction with any of them, but I can tell you this is really quite good stuff alright. The texture was great, giving me a smooth shave without clogging up the blades, and the smell was quite manly without going too far and making it smell like something really chemical. It was also subtle enough not to make me want to gag on the fumes like some gels I have tried. Honestly, some of the stuff out there smells more like muscle rub than anything that should be brought near your face.

You don't need to use huge amounts, if you shave regularly. A little goes a long way, so that keeps this quite affordable, but I would like to see a bigger tube at a better dollar-per-ml rate for those of us who do prefer to use a little extra to make sure we don't snag something and cut ourselves. This is one I have recommended to some of my friends at the Bridge club, and a few have already confirmed they agree with my opinion after buying some themselves. Great stuff!

This came at the perfect time to give it a real good workout. My husband has been growing a beard for several months and we decided it was time for it to go. First thing was the smell, nice and not overpowering at all. So a big plus.

My husband said this was really good as he is used to needing to use a lot of gel when shaving, but her needed nowhere near the same amount to shave this time. It was nice and easy to apply, and felt good on his skin.

He found the aloe in it to be really good as his skin has been itchy lately, and was concerned that this would worsen things, but it really soothed his skin and ,made the whole shaving process much easier.

Seeing him so pleased with these products, I know that we will be getting these again. Well worth the money.

My husband and I both trialled the shaving gel. We both used it in the shower. It has been used on a face, legs and underarms. The true measure of a shaving product is a smooth shave with no nicks. This certainly proved it's value. I found the gel made it very easy for the razor to glide over the skin and helped to give a close shave. The gel is quite thick. My husband said it was like lube. It did feel a bit strange the first time but I soon got accustomed to it.

We felt it was very good value for money and will be ensuring that it always in our house. I recommend that others try it for themselves.

Nourish Tahitian Lime & Sandalwood natural hand wash is lovingly crafted in New Zealand. It's enriched with Coconut Oil, Manuka Honey and Harakeke. Blended with natural botanicals to hygienically clean & moisturise your hands, refreshing and rejuvenating them with every wash.