Doctor Who - The Nightmare of Eden review 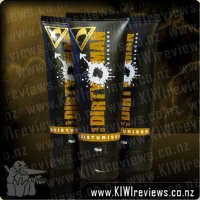 Disclosure StatementFULL DISCLOSURE: A number of units of this product have, at some time, been supplied to KIWIreviews by the company for the purposes of unbiased, independent reviews. No fee was accepted by KIWIreviews or the reviewers themselves - these are genuine, unpaid consumer reviews.
Available:
Via online store and at selected retailers

For the outdoor animals amongst us our SPF 30 Moisturiser contains all the great ingredients of our standard moisturiser but with the added benefit of having a tested Sun Protection Factor of 30.

Use this during the day to protect your skin from the suns harmful rays where ever you are.

The first thing I noticed about this tube of moisturiser was the lack of foil seal. This was a very pleasant and welcome surprise. I know I should want my products to be safe from evil tampering. But frankly I hate how much I have to struggle to open these foil tabs.

The scrub in this range suggests using the moisturiser aftwe the scrub to replace lost moisture. So we did just that. You need very little of this creme. It comes out really easily. Rub it in, and you can feel it on your skin, sitting on the surface for quite some time. That's not ideal but soon goes away. Once it soaks in, your skin still feels soft but isn't greasy which is good.

It does soften your skin a lot. It hardly seemed to smell at all to me. Which is great for those of us with sensitive noses. Because you need so little of the product, the price is very cost effective - unless you get heavy handed.

Really like the packaging of this range. The matte black and the raised lettering is so effective.

This moisturiser from Dirty Man Skincare comes in an attractive, easy-to-use tube that will look right at home on any bathroom shelf.

It contains some sun protection (SPF 30) and is easy to spread on your face. The moisturiser didn't absorb into my skin straight away so my face looked a bit white for a few minutes which was a bit of a downer for me.

Once the moisturiser has been absorbed into your skin it feels good and the smell is pleasant.

This moisturiser is worth a try but make sure you don't squeeze the tube too hard. The moisturiser comes out very easily and you only need a small amount to cover your face.

And then I was told by one of my wee mokopuna that she did not like my "sandpaper face" when she gave her old Koro a kiss on the cheek goodbye. Even after a shave my cheek was not yet up to her standards, so it was time to swallow my doubts and give this 'silky smooth face' idea a go.

Being of the 'dark skinned native' complexion the first thing I noticed was the sunscreen factor in it made me do a time-lapse impression of Michael Jackson until it all sank into my skin. This is something that really needs to be applied at least 20 minutes before you leave the house if you have skin that isn't the same shade as those silly vampire teens off that movie. But after the paleness fades away and you return to looking like you have a heartbeat, the results are pretty good.

The wife of my eldest boy told me that you should never judge a moisturiser until at least an hour after you put it on. You need time for it to sink in, rehydrate the cells, and for any residue to get dealt with. I'm an old man, my clock is ticking to fast already, I don't have time to waste. So I made an assessment after 10 minutes and I was happy. My skin was softer and felt less brittle for a start. After another 20 minutes I could feel the difference myself - it used to be that my fingers felt fine on my cheek, but now my cheek was telling me I was rubbing a dry stick on it. That is some progress. Another half an hour later and I could tell my daughter in law was right, because my face felt 5 years younger!

Even though this product is clearly for the face, it says so on the pack, I decided my dry stick fingers needed to be dealt with too so used a little on my hands. There was the same progression there too, but not at least I could see the difference too. I don't plan to waste this tube on my hands, I will be buying a different product for that, but trying this was a bit of an eye opener in many ways. But the best bit is that I didn't smell like I had tripped over in a lady's bathroom and gotten soaked with her beauty products. I am not entirely sure I would call the smell masculine, but it was far enough away from feminine that I think I could talk my way through it.

My husband used this and thought that it was brilliant. He didn't need to use too much of it, which is always a bonus, and means that the product is well worth its money as you won't run out of it too quickly.

It has a good smell to it, it's not too strong or overpowering (a plus when it is on the face), and it's one that suits a bloke. You just need to make sure you rub it in well so that you don't get any 'streak' marks on your face. It was great for the couple of days that we had a sudden hot day, and while out and about my husband felt no only good with it on (didn't feel sweaty under the heat as some products do) and there was no sunburn at the end of the day.

My husband is keen to get this again, and at the price and how long it will last, I can't argue with him on this one.

As an ex-farmer, the only use we ever had for a moisturiser on the farm was for baby oil only and that was used to make the noses shiney on pigs, cows or sheep (yes, this is true) and that really was that.

I guess chaps working on the land are never the best at looking after themselves, let alone looking after their skin; hence a high incidence in skin melanomas and signs of early aging. And I know I am guilty of that too. Not because of the 'metro' connotations of using skin care products, but more because I just couldn't be bothered.

I was keen to give the Dirty Man moisturiser a try, and was pleasantly surprised. The clean masculine scent was quite appealing and I am sure would be appealing to most chaps. The cream has a built in sunscreen for added protection against the harsh New Zealand sun; however, if you don't rub this in correctly (as with any other sun screen) you can look a little cadavorous, but that said, it was an effective moisturing product.

I don't use this product every day, more because I rush out of the house early and forget to use it, but I am aware that I would be better for using it; after all, no product works if it stays in the bottle. This is a great product, a little goes a long way and this alone make it well worth the money.

I was very pleased to see that the Dirty Man moisteriser has a SPF 30 sunscreen. As with other moisterisers with built in sunscreen it is thicker than a regular moisturiser and takes more rubbing into the skin.

My skin felt lovely and soft after using the moisturiser. It left me feeling pampered. I have been using it on my hands as well as my face and I have noticed even the next morning that they are softer.

It has a distinctive fragrance which matches the other products in the Dirty Man range. The fragrance is stronger than what I would expect from a moisturiser but very masculine and pleasant.

I love that it is a New Zealand made product as I am keen to support local businesses and they produce less of a carbon footprint than goods transported around the world.

The tube was easy to use but I was very surprised to see that there was no foil seal on it. This allowed my toddler to test it on the carpet before I had used it on my skin.