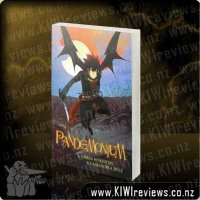 Disclosure StatementFULL DISCLOSURE: A number of units of this product have, at some time, been supplied to KIWIreviews by Scholastic (NZ) or their agents for the purposes of unbiased, independent reviews. No fee was accepted by KIWIreviews or the reviewers themselves - these are genuine, unpaid consumer reviews.
Available:
March 2012

Seifer's life is about to become a royal pain... As captain of the local skullball team, Seifer Tombchewer is the envy of his peers. He's fast, he's strong, and he flies circles around the competition. But Seifer's always dreamed of more - of leaving his tiny, remote village for a new life beyond the mountains.

He just never dreamed it would happen like this. Knocked unconscious and abducted, Seifer awakens in the royal palace to learn that Prince Talon Pandemonium has gone missing. And since Seifer is a ringer for Talon, it's his duty to replace the missing royal in his roles of diplomat, warrior, and Lord Defender of the Realm.

With humour, action, and a dash of the macabre, acclaimed writer Chris Wooding and debut artist Cassandra Diaz team for a classic tale of mistaken identity set against the breathtakingly original backdrop of the Darkling Realm.

I was never a fan of comics and thought I would struggle a little to get though this but I quickly discovered I was wrong. (My husband did inform me that it is a graphic novel and not a comic).

I was intrigued as I flicked through from cover to cover. The art work was so appealing that I had to sit and start this straight away. It' s a very easy read once you go with the flow of the goofy slapstick humor.

It has grandfathers that chew on tombstones, giant red cats as big as houses and a card gambler named Baron Canasta (even I understood that one).

It all finished too quickly and that maybe because I like lengthy books and not quite used to graphic novels. I'm hoping there will be more in this series as the ending was left open. $19 seems a little steep to me, $10 - $15 seems more reasonable but like I said, I'm new to graphic novels and this maybe an average price.

Some say "comics" while others say "graphic novel" and to be honest, I have always been comfortable with either name. It has only been recently that I have begun to appreciate the subtle distinction between the two... and seen plenty that have been labelled the wrong way. In this case, this is certainly a 'graphic novel' albeit a short one.

With a fun storyline by Chris Wooding that I found really easy to engage with, intelligent, and quite well structured... partnered with excellent and very appropriate artwork by Cassandra Diaz, this was a real pleasure to read... for the 23 minutes it took me to get through it.

That's probably my biggest gripe with any GN... how quickly you can plow through them. Often, it would be more accurate to describe them as "Graphic Short Stories" - if that wasn't an even worse mouthful to try and "sell" to the public. None the less, the enjoyment factor holds its own against the usual "comic book" fare such as it is. I think the more bookish binding gives it a better reputation - something I first discovered when reading the "Hellblazer" books (which were the basis for the movie "Constantine" starring Keanu Reeves) in the traditional "comic foldover" format, verses the more respected "Sandman" stories by Neal Gaiman. (And yes, I am fully aware THAT sentiment is going to cause some controversy!

Overall, though this was short, aimed at kids, and somewhat "silly" in places, I loved it and really do want to see more... so to those in power at Scholastic... please? -bats eyelids in a pathetic attempt to bias you towards signing on more titles-

The only thing would be to see the price come down a bit... "comics" might be frowned on, but they still manage to be more affordable.

Score: 6.5
Product reviews for listing 5445: The Adventures of Kory - Flight of the Kiwi -  Written by Paul Martin

In the North Island of New Zealand, there is a place called Whale Bay, where surfers ride the waves that roll in. It is here, a little brown kiwi calls home. Kory and his friend, Bert the green gecko, enjoy surfing and fishing. Adventure tracks these two characters and Kory often needs to use his 'Kiwi ingenuity' to get out of tricky situations he and Bert find themselves in.