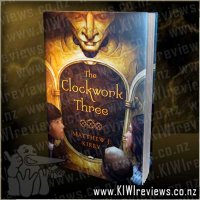 Hannah is a soft-hearted, strong-willed girl from the tenements, who supports her family as a hotel maid when tragedy strikes and her father can no longer work. She learns about a hidden treasure, which she knows will save her family -- if she can find it.

And Frederick, the talented and intense clockmaker's apprentice, seeks to learn the truth about his mother while trying to forget the nightmares of the orphanage where she left him. He is determined to build an automaton and enter the clockmakers' guild -- if only he can create a working head.

Together, the three discover they have phenomenal power when they team up as friends, and that they can overcome even the darkest of fears.

With a strong feeling of old London that has a very Oliver Twist type vibe to it and just hint of fantasy, "The Clockwork Three" is a very quiet, gently paced book that takes you by the hand and guides you through the story of 3 youngsters, who become friends and set out to help each other with the separate tasks each of them is desperate to accomplish. I would definitely say that this book is aimed more at 9-12 year old girls, rather than boys, due to more of an emotional touch (feeling sorry for the plight of these poor children... orphaned, made to live/work in harsh conditions, etc) rather than action and adventure that would appeal more to boys. Plus there is a hint of romance between Hannah and Frederick, but for me, it was all pretty evenly paced, with no really exciting bits, but also no quieter boring patches.

Despite being a little disappointing, as the blurb about the book made it sound like there would be a far bigger fantasy element to the story than there actually was, Matthew J. Kirby does write quite a good story with plenty of description that makes it easy to picture everything, without going overboard so you're weighed down by all the tiny details and forget the actual plot. He keeps the story simple, without too many twists and turns, yet interesting enough to keep you wanting to read, just to see where he takes it. The main characters are all easily likeable, strong willed (with Hannah being the quieter of the 3, yet still with that quiet inner strength), and loyal to each other and those they care about, with each of the main 3 children having their own "baddie" to try and deal with. The mysterious Madame Pomeroy and her companion, Yakov were definitely the most intriguing of all the characters though, and I would've loved to have known more of their background, along with learning more about the "enchanted" green violin.

While the main story does feel completed at the end of the book, I feel there could easily be another novel or more to follow on with the way Kirby left things at the end. So, despite finding this book rather on the quiet side, it wasn't exactly dull, and I would be quite keen to check out any further books by this author, especially if they featured any of the characters from "The Clockwork Three". If you enjoy a quiet read, this book is definitely worth giving a try, but if you enjoy novels with quite a bit of fantasy or excitement, then you'd probably do better to look elsewhere.

This is a story about three young children who were brought together in curious ways. Each of the characters: Hannah, Frederick and Giuseppe needed something to make their lives better in different ways. So to get what they each wanted they helped each other.

I felt unhappy when Giuseppe was about to be killed by his 'Padrone': "You're not getting away this time. You're dead, you know".

I was relieved when Hannah gave her dad the medicine that Alice had made to cure him. Then her dad recovered within minutes. "Colour returned to the stonemason's face".

I was happy for Frederick when he remembered his mum singing to him when he was young. "He heard her singing. Her clear voice and he hummed along with her".

I really enjoyed the twists and turns in the book. The three main characters were strong and inspiring. They also did whatever it took to get what they wanted.
If you are looking for a book with a great and thrilling adventure with a twist at the end; then this is the book for you.

It's hard being the only evolved boy in your tribe. Arg does his best to fit in. But nobody really understands him.

His mum is bewildered by his desire to wear clothes. His older sister, Hng, is constantly annoyed by his cleverness. His dad tries to be supportive of Arg's strange, new ways, but he secretly hopes Arg will grow up to be just like any other Neanderthal.

Arg's life is changed forever when he meets Skeet, an equally evolved talking T-rex. Together they embark on a mission to save the dinosaurs from extinction.