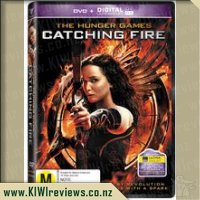 Disclosure StatementFULL DISCLOSURE: A number of units of this product have, at some time, been supplied to KIWIreviews by Roadshow (NZ) Ltd or their agents for the purposes of unbiased, independent reviews. No fee was accepted by KIWIreviews or the reviewers themselves - these are genuine, unpaid consumer reviews.
Available:
March 2014

Against all odds, Katniss and fellow tribute Peeta Mellark (Josh Hutcherson - Red Dawn) have returned home after surviving the Hunger Games. Winning means they must leave their loved ones behind and embark on a Victory Tour through the districts. Along the way, Katniss senses a rebellion simmering - one that she and Peeta may have sparked.

Like every other book-reading teen on the planet, I love the Hunger Games series. When the first movie rolled around, however, I left the midnight premiere majorly disappointed. I was unhappy with the casting, effects and disloyalty to the core of what our beloved story of The Girl Who Was on Fire is truly about.

Given my previous experience, I walked into the 8 p.m. showing of The Hunger Games: Catching Fire last night with low expectations. I heard rumours that this adaptation was more loyal to the book, but I wasn't sure that would be enough to win me over. To my delighted surprise, 30 minutes into the almost two and a half hour film, I was sure that this movie would live up to everything I wanted it to be.

Everything was how I imagined it reading the novel two years ago. The characters, the districts and the arena all immensely improved from the franchise's opening. It was much more focused on the twisted ways of the Capitol and the brewing rebellion than the love triangle the first film seemed to revolve around.

After Hunger Games, I wasn't sold on Jennifer Lawrence and Josh Hutcherson as District 12's tributes, Katniss and Peeta, but after their performances in Catching Fire, I could not be more pleased with the casting of these movies. Lawrence's portrayal of Katniss was true to her book equivalent. She had several intense scenes in this movie, and each was poignant and believable. Hutcherson's Peeta earned your sympathy, yet his strength was not lost in excessive pity. The new additions like Plutarch, Finnick and Johanna also did not disappoint in the slightest.

Another perfect thing about Catching Fire was the pacing. The victory tour, the preparations for the games and the time in the arena each had enough time to cover the important events, while nothing dragged on too long. The tributes' time in the arena kept you on the edge of your seat. Suspense and anticipation buzzed in the theatre; my friends and I left with an adrenaline rush because of it.

The closing scene not only concluded the movie in a spectacular way, with amazing acting by J-law, but also set up the start of the next film, which we'll all be waiting for impatiently. All in all, my low expectations were blown away. I will definitely be going to see Catching Fire again.

I have not read the series of books, and seeing as it was the next big saga following on from Twilight, I felt no need to watch the Hunger Games ones. But after a bit of pressure from friends, I relented and gave it a go. The first film managed to keep my interest despite all of its quirks, and held my curiosity enough that I decided to watch the sequel without needing to be pushed.

This film follows a very similar structure to the original, just stepped up a few notches. There is a lot more teamwork this time round (and for good reason too), and the obstacles increase in difficulty, and become slightly less predictable.

I enjoyed the action-packed Hunger Games portion of the film, but although necessary, the initial storyline was slow and not the most exciting piece to watch. Whilst heroic in the first film, Jennifer Lawrence's character, Katniss, has become less likeable, in my opinion, and her character interactions seem very much fake and unconvincing. However, the ending of the film shows a lot of promise, and is filled with suspense and mystery leading into the next upcoming film.

Visually, the movie is good, the CGI fits in nearly seamlessly. But the characters failed to get me as engaged as I had been by the ending of the original. In my honest opinion, I find that Hunger Games makes a great stand-alone film; this film is much more plot-driven, but without any true excitement occurring, I would personally wait for the final installments to be released and watch 'Catching Fire' and both 'Mockingjay' parts together.

I read the first book in this series and didn't end up reading any further it wasn't that I didn't enjoy the boosk it was just that it wasn't something I would normally read, whereas it is something my daughter really enjoys and has read all the books and kept up with the movies. I requested to review this as I knew she would be excited but as it turned out she had already seen the movie 3 times so I was left watching it alone.

So we were left with a bit of a surprise ending in The Hunger Games so we learn in this movie that Katniss and Peta must enter the games once more. Still lots of fighting and violence and action which makes it enjoyable and builds up the tension and still a lot of battle going on with the capitol that keeps you on the edge of your seat. You see Katniss grow as a character as she begins to find out more about herself and her love interests and grow from strength to strength.

I don't think I would rush out to buy mockingjay but I will watch it at some stage to find out how the series ends I know my duaghter is waiting with baited breath for it's release as I am sure a lot of teens are.

I asked to review this, but missed out, but having seen and thoroughly enjoyed the first movie and then read the three books this was a must see either way.

We join Katniss not too long after the end of the 74th Hunger Games. She learns that her and Peeta's actions in the end of the game have had huge ramifications, people are starting to talk of a revolution and people are rebelling against the Capitol. President Snow comes to visit Katniss with a threat and when unhappy with the results he announces that the reaping will come from previous winners, thus sending Katniss and Peeta back into the arena.

Having read the book I knew exactly what was coming up but it was still done well enough that I wasn't waiting for things to hurry up and move along. There's plenty of mind games going on between Katniss, President Snow and almost everyone else. There is violence to be expected (after all the games are about killing each other) but it doesn't take centre stage and isn't too over the top, which makes it a better film.

My husband really enjoyed this, happily turning off the tablet, which is a big thing at the moment. Lawrence does a great job portraying the struggling Katniss, just trying to work out where she exists in the world, though I am curious as to if she'll be as believable when the next two come out, after all she'll be near thirty and Katniss is not yet twenty. The supporting staff was well picked, though it will be interesting to see how they replace Hoffman.

I'm looking forward to the next in the series.

Before watching this film, I had not read the Hunger Game books. I had very little interest in them and my children are all too young to be reading them or be interested in the movies. So I have had very little exposure to the series at all.

I requested this DVD thinking I would give it a go. Of course this is the second movie in the series, and so with egg on face I managed to borrow a friend's copy of the first film. I then had a bit of a movie marathon. At first I thought I would just do some work I had to do with this on in the background, but both movies absolutely drew me in. By the 30 minute mark of the first film I had to close my laptop.

With the second movie I wasn't sure how they would make things work. The premise seemed like it would follow the same, but I was so wrong. There were moments as my husband wandered through for coffee that I was actually yelling at the screen. He said I was clearly very engaged and I agree. Some parts were a bit predictable, and made me cringe when my thoughts were confirmed. But never in a bad way.

What I liked was that it was violent, but not overly. It had blood, but it was never in your face. The main focus of the movies is not really love. It's not really about the games. It's more about a anti-utopia going on. The vast differences between the districts and the Capital. There is so much going on. I found the whole thing really clever. The costumes in the Capital are amazing, the theatrics and light shows are all so exciting. I can't wait to see what happens next. I am converted. Thanks so much Roadshow & KIWIreviews for this opportunity.

After ten years of painstaking work, novelist Karen Eiffel is nearing completion on her latest, and potentially finest, book. Her only remaining challenge is to figure out how to kill off her main character, Harold Crick.

Little does she know that Harold Crick is inexplicably alive-and-well in the real world, and suddenly aware of her ... more...