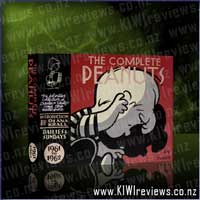 'I have naturally curly hair.' With those fateful words, The Complete Peanuts introduces another main character to the gang, the vain Frieda (not to mention her cat Faron). Also in this volume, which collects two full years from the early 1960s - one of Schulz's most fertile periods - Sally begins to grow up, Snoopy endures an avian family crisis, Linus develops a crush on Miss Othmar and loses his blanket again (when lucy turns it into a kite and then lets it fly away), and more baseball routs. Aaaugh!!

A Taste of Chlorine
Rating: 4.5

A great collection of comic strips from Charles Schulz! His unique light-hearted and dark humour still flows in this 1961 to 1962 volume of the Complete Peanuts.

Schulz demonstrates an amazing talent in drawing very simple yet instantly recognisable characters. His humour shows a remarkable perception of human interactions and sometimes a whacky sense of the bizarre. The appearance and personality of the primary characters have been pared down to become powerful icons of specific common experiences in 'modern' life - whether for child, adult or animal.

In this volume Frieda is introduced - the girl with naturally curly hair. Her ongoing obsession with her superficial beauty feature gets a bit tedious, which I suspect is precisely Schulz's point. She gets a cat, Faron, mostly to annoy Snoopy, but the cat only appears a few times. Violet also appears much less than she did in the 1959 to 1960 Complete Peanuts volume. Lucy becomes more established in her psychiatry practice and is crabby as ever. But it is Linus who comes to the fore as a major player in this collection of strips, increasingly philosophical, still hopeful of good favour with the Great Pumpkin, traumatised by repeated incidents involving loss of his blanket and in need of glasses (according to his ophthalmologist) which he sports from around February to September 1962 (after that they no longer appear). Charlie Brown is in his usual depressed form, but Snoopy is determined to make life interesting. He extends his skills of character impressions including a vulture, gorilla, salmon swimming upstream, teddy bear, even a grinning gargoyle.

As usual, there are plenty of baseball strips in this collection. Schulz also incorporates a celebration of the civil war centennial by putting Union Hats on Charlie Brown, Linus and Snoopy in a couple of November 1961 strips. In case anyone might have missed it in the first strip, as Charlie Brown and Snoopy go marching along in the second one Lucy enquires "How long does the Centennial last?"

A worthwhile addition to the collection.

Do you dare find out what's happening behind the counters of your neighbourhood fast-food joint? Then grab a bucket and dive into one of the creepiest graphic novels of the year!

Super-sized: Strange Tales from a Fast-Food Culture is an entertaining-and at times gut-wrenching-series of stories focusing on America's ubiquitous and potentially destructive fast-food culture.

A perfect companion to Super Size Me, the graphic novel will bridge the gaps between humour, fact, and heart, while peering behind the scenes of the fast food world.