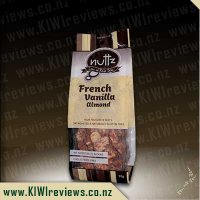 Disclosure StatementFULL DISCLOSURE: A number of units of this product have, at some time, been supplied to KIWIreviews by Nuttz Gourmet Selection or their agents for the purposes of unbiased, independent reviews. No fee was accepted by KIWIreviews or the reviewers themselves - these are genuine, unpaid consumer reviews.
Available:
at selected quality retailers

Sweet caramalised vanilla and honey coated almond made to an old Viennese traditional family recipe past down over the generations. Cooked by hand in large copper pans European Christmas market style! Treat yourself!

How do I adore these? Let me count the ways...

After the recent success of my Fruit Crumble using the Cinnamon Cashews is part of the crumble topping, I thought I needed to get a little more out-of-the-box with these. So, after putting a small pile aside for, erm, testing... I whizzed the rest up into a very fine crumb and mixed them with some icing sugar and a 300ml bottle of cream. Then, whipped it until it reached a medium-soft-peaks stage.

Using this as a dessert topping proved to be a minor master-stroke for me, as the flavour was nothing short of incredible, and the almond meal acted as a thickener, so not only did it firm up quickly but there was none of the almost-butter flavour I sometimes get if I aim for a stable whipped texture that won't immediately give way when on a hot dessert.

The Almond taste came through wonderfully, adding a really nice but subtle highlight to the fruit salad I had, and the French Vanilla flavour was the perfect replacement for vanilla essence to make the Chantilly Cream. I really can not see myself doing a better dessert topping any time soon!

The nuts on their own were wonderful too, naturally. I roughly chopped a few up and offered them to my youngest son, but he was not a fan. "It's not peanuts!

" he wailed as he headed out to his playroom in protest. However, *I* loved them, and fully plan to spend far more money than I should on these nuts when I see the stand next.

Overall, wonderful, simply wonderful - as a snack, as a secret ingredient, as a present to someone you really like.

We have had to become a gluten free household for three members of our family so I find myself constantly on the look out for products that are gluten free. None of my children are keen on nuts so I was hoping that these nuttz French Vanilla Almonds might appeal since they contain a fair amount of sugar which for kids is usually a good incentive.

These almonds come in a very easy to open 90 gm bag that could easily be scoffed all by yourself on one sitting. In the interests of research I thought I better share my one packet around though I really wanted to hide it and eat them in secret! These nuts are absolutely moorish. The crunchy outer is soft so won't break any fillings and the taste is absolutely perfect. They aren't overpoweringly sweet and have just teh right hint of vanilla.

All members of my family love them especially Miss Seven who normally will shun anything with nuts in them. We ate almost the whole packet as a pudding snack one night minus a few nuts I saved to crush and sprinkle on a fruit crumble. These were a lovely addition to the crumble as I wouldn't usually use nuts in my topping.

Overall I think these are absolutely scrumptious and the whole family give this flavour the thumbs up. For the price I would be buying these as a sweet treat but would have no problem giving them to the kids as a snack as it means they will eat nuts even though they are nuts with sugar.

I can definitely recommend these and if you love almonds the you will absolutely love these.

My husband is addicted to eating nuts and as a consequence I have become quite the nut eater too - every new kind he tries I have to try and every birthday or Christmas I am on the hunt for something nut related for him. I also love anything vanilla flavoured - these were my two reasons for wanting to try these nuts and I am so glad I got the opportunity. These nuts are totally divine! While you can still taste the almonds, you also get a beautiful flavouring of vanilla, honey and I guess the caramel flavouring mixed in with the extra crunch this gives them. Just perfect! After eating a few we had to hide them away as we could have sat there n continued eating the entire packet in one go.

I found some time to do some extra baking and something with these nuts was top of the list. In the end I settled for chocolate biscuits with these on top. I also blended some in to the biscuit mixture just to make sure the flavour really got in there. I have to say that I would buy these nuts again purely just to use in baking after the fantastic results. Again, these biscuits could have easily been eaten in one go so we took them round to my mother in laws to share - everyone was raving about them.

I know it had to be the nuts that made these biscuits extra special as I've used this recipe plenty of times and its nothing special - nice but not amazing if you know what I mean. I loved the way the nuts seemed to flavour the biscuits but still retained their crunch too. In fact it was so good that I tried making a second batch but this time with a different recipe - these were a fail (too big/flat) but that was totally to do with the recipe and not the nuts!

I can happily say that I will be buying these again! My husband really loved them too (even though vanilla wouldn't normally be his first choice)... These are quite expensive but then not any more so then other brands I've brought before - its more just that all nuts are too expensive these days! Definitely money well spent and I recommend these to everyone!!

I love nuts and eat a lot of natural ones as snacks so I was really keen to give the French vanilla ones a try and boy am I glad I did! From the first taste I was hooked - the nuts had the prefect amount of flavouring on them, the honey and vanilla gave the nuts a lovely extra crunch.

I found them so tasty just one was not enough I ended up having to get my husband to hide the bag from me before I ate the lot and had none left for the baking I wanted to do with them. The next night I got my husband to give them back to me and after sneaking another few I managed to have just enough to add to my baking. I made chocolate brownies and switched the walnuts I usually put in and replaced them with the French vanilla almonds instead. The results an extra special kick to our normal chocolate brownie. You could really taste a hint of the vanilla.

Though the almonds seem a little on the expensive side, it won't put me off buying them as they are so tasty it's certainly on my list of things to buy when I want to treat myself. I don't think I would want to share them though, they are so good they will be just for me!

More than your average Sausage Roll, by far.