When She Was Bad review 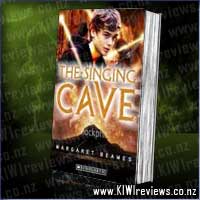 Disclosure StatementFULL DISCLOSURE: A number of units of this product have, at some time, been supplied to KIWIreviews by Scholastic (NZ) or their agents for the purposes of unbiased, independent reviews. No fee was accepted by KIWIreviews or the reviewers themselves - these are genuine, unpaid consumer reviews.
Available:
July 2009

Tom's parents have taken a research job on an idyllic Pacific Island. Sounds great - but Tom's not enjoying it so much. That is, until he makes friends with Pero, who tells him of a strange tale regarding the Singing Caves.

It seems that those who venture in, don't ever come back. In a fit of pique, Tom dares Pero to go in. He never really expects him to go but when he does, and disappears, Tom holds himself responsible. He decides he must go into the cave either to find Pero or face whatever the caves might bring.

He could never imagine what he will find there - which has nothing to do with the island - or Earth for that matter.

The premise is interesting enough to make a good read for young children. The story itself has limited complexity (if any) and the characters are fairly one-dimesional.

I tried to imagine what age group would find this a satisfying read, maybe 7-9?

I remember the favourite stories I read aged 9-12 were The Silver Sword (Historic), The Hobbit (Fantasy), and The Ship Who Sang (Sci-Fi). So, based on my own experience, I think children in this age group would require something more than what was provided in The Singing Cave.

I thought the premise for the Singing Cave sounded quite good, but the execution was a little young for me. I didn't mind the simple language, that is a requirement for a book targeted at this age group, the main downside was the lack of any interest with the relationships in the story. The characters were all very flat compared with 39 Clues for example, which is targeted at a similar age group or even (going back a few years now) the Famous Five, which I loved when I was about seven.
As a pure plot based adventure for children just learning to read 'chapter books' I imagine this would be interesting and provide a satisfying conclusion, but it's not really a book I would bother taking with me to read to the kids I babysit.