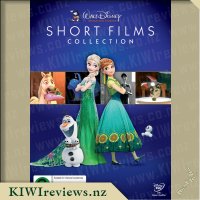 The SHORT FILMS COLLECTION includes contemporary shorts starring classic cartoon characters, such as the groundbreaking 2013 Mickey Mouse Cartoon "Get A Horse!" as well as celebrated Oscar winners "Paperman" (2012) and "Feast" (2014). Enjoy them together for the first time in this must-own collection, with all-new extras, including introductions and interviews with the Disney Animation filmmakers themselves. "This clever collection of modern era Disney animated shorts is a must-have for any serious film fan." (Jim Hill, Huffington Post)

Features the following shorts:
•  John Henry
•  Lorenzo
•  The Little Matchgirl
•  How To Hook Up Your Home Theater
•  Tick Tock Tale
•  Prep & Landing: Operation Secret Santa
•  The Ballad Of Nessie
•  Tangled Ever After
•  Paperman
•  Get A Horse!
•  Feast
•  Frozen Fever

Not too long ago a new remake of Cinderella was released and of course I heard that there was going to be a short before it started, Frozen Fever. Now, I have one very Frozen mad little girl but I couldn't justify going to one movie for just a couple of minutes that we actually wanted to watch, but this DVD has come out so I knew we had to borrow it.

There's twelve short clips all up and each one has a small intro to begin with about how the got the idea, or in some cases how long they had been thinking of the particular short. All three of my kids said their favorite one was "Frozen Fever" which I knew would be the case for my four year old but I wasn't expecting it with my other two. We had already seen two of them but one of them is delightful enough that I was happy to see it again, and there was one that I really didn't care about (Goofy and football) but the rest were really nice.

Another plus about this is that it isn't just one animation design, so there is a good range and each one fits the story well. "Feast" is a gorgeous little clip about a puppy and his love of food and his owner and "Tick Tock Tale" is a sweet story about being different and getting the chance to show that your difference is a good thing. Ō£Prep & Landing: Operation Secret Santa" was both amusing and sweet, with Mrs Claus trying to surprise Mr Clause.

I would love to own this on DVD, the kids loved this and it was interesting seeing the thoughts and planning behind each one.