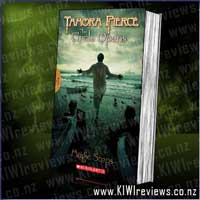 While caring for her uncle in Summersea, Lady Sandrilene Fa Toren witnesses a boy working a most unusual spell. Pasco can dance magic, but he wants nothing to do with his powers. It's up to Sandry to teach him about his magic - and to convince him he can use it to get to the bottom of a series of gruesome murders.

Book One in "The Circle Opens" series.

Magic Steps is a delightful tale of magic intrigue. Tamora Pierce writes with excellent narrative voice. The story is quickly immersive, and 'alive' with likeable characters and vivid settings.

It's great to see co-operation between equally powerful female and male protagonists. Full marks for creating exciting and gutsy female characters, friend and foe alike - no wimpy girls in this story!

Original, creative, compelling - a captivating read.
Primarily targetted at young adult audience, it was nevertheless thoroughly enjoyable as a quick read for an adult.

I own and have read almost all of Pierce's books and this one, while not the best of her works, is still a rather enjoyable read.

This book picks up where 'The Circle of Magic' left off and for the large part follows the original story seamlessly. While it's an extension of the original quartet, it can be read alone and is still a complete story by itself.

The story is light enough for an average 10-year-old to enjoy, but still engaging enough to entertain my 22-year-old flatmate for a couple of lazy hours.

For a fantasy novel, Pierce makes the use of magic seem completely normal and vaguely familiar. It's not Harry-Potter wizardry (althought the children-aspect of it does draw some similarities), but it focuses on the "magic" of everyday activities which makes the idea that the story could be real a lot more plausible.

I've re-read both 'Circle' series several times, and they're starting to fall apart, and many times picked up on something I didn't notice during the first reading - so there is definite re-read value here. And I'll admit, I've been late for work due to getting caught up in this book too.

As a side note, this is definitely aimed at the younger generations and it's a great book to keep in the car to get some peace and quiet from the back seat.

At first the Dreamrealm is a glorious escape from Awa's daily struggles but something is not ... more...