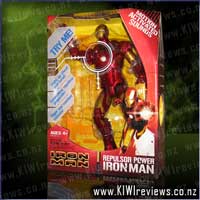 Disclosure StatementFULL DISCLOSURE: A number of units of this product have, at some time, been supplied to KIWIreviews by Hasbro (NZ) or their agents for the purposes of unbiased, independent reviews. No fee was accepted by KIWIreviews or the reviewers themselves - these are genuine, unpaid consumer reviews.
Available:
At Quality Retailers

Iron Man is here and ready for action with his repulsors fully charged and his hypervelocity pulsejet boots fueled and ready. The bad guys don't stand a chance. He's a super sonic savior, an awesome armored hero, and he'll blast through or soar over anything that stands in his way!

Create your own Iron Man adventures with this electronic, motion-activated action figure! Pose Iron Man's heel up for landing sounds. Pose his heel down for blast-off sounds! Press the button on Iron Man's chest for glowing repulsors and to hear Iron Man proclaim, 'I am Iron Man!' Aim the repulsor projectile at your target and launch it for an all-out Iron Man assault!

My son absolutely loved playing with all of the Iron Man toys, but this was his preferred 'action figure' toy. It was great to see him acting out all sorts of stories his creative little mind could dream up, including some interesting 'cross over' tales, including 'Tony Stark' donning a Transformer-built suit so that he could 'shift weapons' (aka the weapons could transform during battle) and fire more than one at a time, as well as split off and form 2 combat vehicles, one the traditional 'Iron Man' suit containing Tony, the other a Transformer under remote control.

I thought the voice was a little 'rusty' but that didn't seem to bother my little battler, but by far the biggest 'bug' that we both agreed on was the limited range of movement of the joints. Very 1-directional, no 'ball-&-socket' joints at all! Iron Man couldn't put his arms out to his sides, for example, nor pull them in from 'supersonic flight' position to touch his hips. Not a *huge* issue, I admit, but it's the little things that can ruin a 'great' toy, and mark it down to merely a 'good' one.

I liked the switch-loaded heel that triggered 'flight mode' noises whenever you lifted the figure off a hard surface. personally, I think a small, internal orientation-detector would have done better. It's not hard to install a tiny mercury-switch to detect if the model is vertical or not. Why is this such an issue? Because 'landing' the figurine on a soft surface doesn't always shut off 'flight mode' and EVERY time you lift him up he flies... it's noisy! But hey, at the end of the day it was the look of sheer joy on the lads face that made it all worthwhile.

Overall, a fun toy, and a pretty good one for an Iron Man. The launching repulsor blast was fun, and the way the other palm lit up when you fired was dinky... shame they couldn't put a launcher in BOTH arms, and make the projectiles light up when fired... THAT would have been seriously cool!

A very cool toy and one my youngest nephew loved to play with. His favourite game didnt impress his sister though because he spent nearly three hours playing out a scene from the movie 'Small Soldiers' where Iron Man took down the invading hourds of his sisters doll collection. Much to her horror and his enjoyment a fair few of her dolls became "walking wounded" in the epic battle and now he has to save up his pocket money to replace them. Iron Man performed very well during this conflict. His posable limbs allowed for nearly everything he saw in the Iron Man movie and the repulsor blast launcher was used to devastating effect against the invasion force from dollsville. A suggestion though, maybe include a few more spare repulsor blast projectiles in the pack. He was spending more time dodging around enemy lines to collect up his ammo than he was firing it. All in all a pretty cool action figure though and one I am glad he got a chance to try out. It has become his favourite toy for now, until he gets access to anything Stars Wars related.

NOTE: These are no longer on the market in NZ due to a safety recall

Magnetix - the toy that teaches and empowers kids of all ages! Use your imagination and create countless shapes for endless hours of fun...