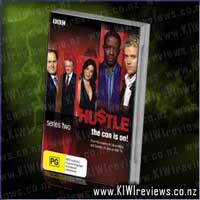 The second series of the slick and sexy BBC drama about a group of elite con artists, who each week pull-off a complicated scam with several twists.

DVD Special Features:
•  The Big Finish: An in-depth documentary on the making of the final episode
•  Cast Biographies

After seeing Series 1 a little while ago, I didn't know if they could out-do themselves... but they did it! Series 2 is even better, with a truly amazing stunning 'long con' pulled off as the season finale.

Mickey Bricks is back with all the old crew, including the ever-enthusiastic, but highly entertaining Danny Blue, who are again emptying the pockets of the unwary, unscrupulous and greedy members of the higher income bracket... and sometimes even giving back to the needy... other con artists of course, but still needy.

The sheer audacity of the cons is still astounding, the Police are still played for fools, and even a 'bent copper' is taken down a peg or three by this team of modern day highwaymen, with a stunning fem fatale thrown in of course. They even manage to get one over the SAME crew of cops who almost got them in Series 1...

Overall, for those who enjoy good British wit, humour that requires a bit of thought to get the punchline... this is a series sure to please. Best yet, if you enjoyed Series 1, you're going to LOVE Series 2... and Series 3 looks to be a real stunner too...

The plot centers around the enigmatic Hotel Cortez in Los Angeles, California, that catches the eye of an intrepid homicide detective (Bentley). The Cortez is host to many disturbing scenarios and paranormal events, and is overseen by its enigmatic matron, The Countess (Gaga), who is a bloodsucking fashionista.