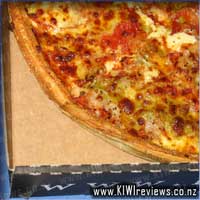 Disclosure StatementFULL DISCLOSURE: A number of units of this product have, at some time, been supplied to KIWIreviews by Hell Pizza or their agents for the purposes of unbiased, independent reviews. No fee was accepted by KIWIreviews or the reviewers themselves - these are genuine, unpaid consumer reviews.
Available:
from your local Hell Pizza outlet

Not having tried a Hell's pizza for many many many years, in fact I can't remember the last pizza I tried, I was looking foward to having another. And the brimstone didn't disappoint, the avocado sauce really adds flavour but doesnt over power the rest of the taste.

Good amount of spice used to compliment the toppings, and the sour cream helped to give it that beaut creamy texture.

Definitely a pizza I would get from Hell again and recommend to others.

I admit that I am never quite sure what to expect from a Hell pizza... the names are wickedly funny, but hardly descriptive. To me, 'Brimstone' is hot and fiery, but this was anything but. A smooth, creamy texture, a flavour so mild I wasn't sure there was any at first... this is almost a sensual pizza! The sort you would eat in a candle-lit room with someone you want to seduce... but the name suggests something you'd throw at the fullback after winning a game in the final seconds!

Now, don't get me wrong... great pizza, most definitely... but mis-named for sure... but then, I can't see Hell's putting "Angel's Wings Pizza" on the menu and getting away with it... now, "Fallen Angel" might work better...

Being a gourmet pizza, the pricetag is a little steep, but quality costs, and the price of avocado's alone these days is enough to warrant $4.00 per person, assuming a 4-person feed from the large. There were 3 of us testing pizzas that night, and there were leftovers, so I think it's about right.

Overall, I think this pizza was a bit bland on it's own, but an excellent dining companion for the spicy, cheesy, Helldogs. As a follow-on from the 'Mischief' pizza, this was unbeatable... the smooth avocado was great for putting out the spice fires in my mouth.

However, I want to make one non-flavour oriented comment here, because I feel it's important to those who appreciate the style of food, but still enjoy 'slumming' it with take-outs now and then... this was one of the tidiest pizzas I have ever tried! When I opened the box, there was no curtain of cheese glued to the lid... no rivers of grease spilling from it's flanks... and no great greasy stain on the bottom of the box... this would be a quite acceptable offering at a 'casual' dinner gathering, friends-&-family picnic or a BBQ!

YUMMO! The taste combinations on this pizza are perfect. The creaminess of the avocado mixed with the slight tang of the spicy chicken and sour cream were great.

The salsa was tasty and not too strong. Using Black pepper as a topping helped lift the tastemeter somewhat as well, I thought. The pizza base did suffer a little sogginess from two quite wet sauces being placed on it. But when weighed up against the taste, it was well worth it.

Overall, a triumph in my opinion and something I look forward to having again. Well done, Hells' Pizza.

This is the Original Tandoori Marinade. Mel's Tandoori marinade is also delicious on tiger prawns or marinate a whole fish! Easily done on the barbecue or in the home oven.

Great as a finger food for parties with drinks.

Use the leftover Tandoori chicken in wraps or on pizza. You can also use with vegetables!

This marinade is 100% VEGETARIAN!