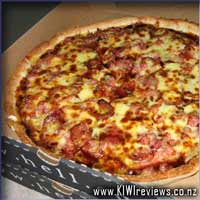 Disclosure StatementFULL DISCLOSURE: A number of units of this product have, at some time, been supplied to KIWIreviews by Hell Pizza or their agents for the purposes of unbiased, independent reviews. No fee was accepted by KIWIreviews or the reviewers themselves - these are genuine, unpaid consumer reviews.
Available:
during open hours

So last night when we went to Hell Pizza for tea this was my partners pizza of choice (not that I was surprised as he is a carnivore after all, and always goes for the meatiest pizza on the menu). The Lust pizza is packed with pepperoni, salami, ham, bacon and cabanossi, with your own choice of sauce, we got BBQ. It is then topped with lashings of mozzarella and sprinkled with herbs and spices.

This being a Hell's pizza, suggests it should be of gourmet quality but I have to admit that both my partner and I didn't find it to be gourmet at all, yeah sure it seemed to have more meat and real meat rather than processed meat to be fair, but we did expect more from it. It was extremely meaty, perhaps to meaty and the sauce was very strong and over powering, this again may have been our fault as maybe we chose the wrong sauce I wouldn't know, I just expect BBQ sauce and meat lovers to go hand in hand. The base however was perfect thin and crispy but not to thin, it was just right.

We probably wouldn't get this pizza again as we would probably stick to Hell's chicken pizzas they seem a bit more gourmet to me, which is what you'd expect for the price you pay!

I am not a huge fan of pizzas, mainly because I do not enjoy capsicums (which seem to feature on most pizzas). So when I was faced with buying pizzas for the workplace, I was pleased to discover that the range of pizzas has changed dramatically in the last few years. Both the range and the overall quality of the ingredients has drastically improved since the days of the less than enjoyable birthday parties that I used to have in Pizza Hut.

A solid alternative to the "Meatlovers", with 5 types of meat and not a capsicum to be seen, I verily enjoyed this pizza. I enjoy the way that you have more control over your toppings now, with choices of sauce. I have tried both the honey mustard, and the BBQ, and while both were delicious, the BBQ was the best by a long shot.

The wait is no longer than usual for a pizza, and if it is eaten fresh, the pizza isn't dry and the meat is tender. Without all the bulky vegetables on top, this pizza holds together well, and is much less messy to eat. My clear favourite choice when it comes to Hell's Pizza (apart from those chicken tenders...mmm)

Hey, what can I say... a great benchmark pizza.

Overall, hard to improve on excellent, but they've done it.

Given that Hell's are gourmet pizzas, I have to say I was a little disappointed by this pizza. There is a difference with the pepperoni not being as dry and crunchy as on other meaty pizzas, I felt that the taste overall was pretty standard.

The tomato sauce on the base was quite strong and had me wishing I liked tomatoes more. The base was strong enough to hold the toppings on and keep my lap clean, always a good thing.

In short, not terribly impressed. They may be advertised as gourmet, but I had trouble telling the difference from other takeaway pizzas available.

I really dig meat pizzas, and if they taste good, thats all the better. Not usually a fan of gourmet pizzas since a disasterous offering from the [-Expletive Deleted-] at Pizza Shmuck a while, back, but when the boss turned up with these and 'suggested' I give them a go, I have to admit after one sniff, he didn't have to 'suggest' twice. The aroma was totally drool-making and I was racing him for the pizza while he was trying to take a photo of it.

After I hoovered up a couple of slices I had to take a break and grab some fizzy drink to help me clear the bloats away, and that gave me time to appreciate the flavours that were in this one. The sauce was delish, but I couldn't tell you if it was the BBQ or the Smokey BBQ Tomato, because the tomato base was quite strong. Not strong enough to overpower the delectable tang of meat, meat, more meat and even more meat, plus some cheese. By no means as filling as say, Domino's Edge Crust, what this lacked in bulk it more than made up for with the flavours. Sometimes less IS more. A great pizza to snarf if you want something with real quality to it.

Not a great fan of gourmet pizzas usually, but this one seemed to have something a bit special... layers of flavour, instead of the more usual 'mashed in together' pap that passes for pizzas at some places I have visited, so I figured it was worth a bit more taste-testing. Glad I did, because this is one yummy pizza indeed.
Plenty of meat and cheese gave a good flavour, the base was light, yet strong enough not to sag and drop the toppings in my lap, and the herbs and spices really gave it a lift without drowning anything out.
Seriously worth a try, if the budget stretches to 'quality' instead of 'cheap'.

Being a bit of a meat-pizza fan, I was very curious to see what Hell could offer... and I have to say, even risking a lightning bolt out of the blue, if this is what they serve 'downstairs' for eternity... sign me up! Fresh out of the oven, this smelled absolutely delicious, and I was drooling well before I got it back to our meeting.

Even before I made it all the way to the table, I was getting mobbed, and the box was swiped out of my hands... I was waiting for the sonic boom as the air returned to fill the vacuum that was once occupied by the box! It was only by sheer force of will, and lung power, that it survived long enough for me to snap a photo.

The tomato sauce on the base was delightful, rich and flavourful yet without drowning out the other flavours, all of which were perfectly balanced. Now one thing I have found over the many years I have been a pizza-snarfer, is that unless you cook it right, salami-style meats will go tough and chewy... no worries here, because this pizza didn't suffer from that problem at all... even when the pizza was reheated in the evil nukebox!

Overall, probably the most delishimo meat pizza I have tried in quite a while... and if the budget allows, I will be back for more of these! Fresh, cold, reheated... it tasted top-notch no matter how I had it! Still a little pricey for a regular feed, but when you want something a little more 'special' then this one would be hard to beat.