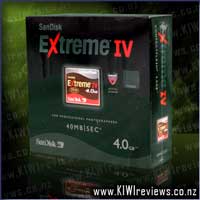 ExtremeIV is the new industry leader in the best-in-class solution for high profile professional photographers. As the elite flash memory cards available on the market, ExtremeIV has extremely fast read/write speeds. This line provides the durability, high-speed, and quality demands for serious photography. SanDisk's award-winning technology solidifies the strength of the ExtremeIV family of high-performance flash cards.

*Based on SanDisk internal testing

Usually, I don't have much need for a CF card, but with the recent borrowing of a high-end digital SLR, I was glad to have one on hand to use, and thus test. The camera, a Nikon D70 with a 12mb onboard buffer is capable of some rapid data transfers. Some other cards thrialled on this camera have proven themselves unable to accept images as fast as the camera could throw them, so I was wondering if this card would live down to that reality, or exceed expectations...

So, slap it into the camera, and head off on a photgraphic tiki-tour for the afternoon... I went utterly shutter crazy, and not once did I hear the little -bleep- that signals "I'm not ready to take another pic, my buffer is still trying to make some room, gimme a sec will'ya!" This REALLY impressed me... it meant that this card could easily take the data as fast as it could get it, and hold a tidy 700+ pictures at 7 megapixels in RAW mode, where each file was around 5.5mb each.

After a half hour patch of rapid snaps without pause, and not a single unwelcome -bleep- I had to admit defeat... I slapped over 600 photos onto that card without it taking a single break... -sigh- Such a small card, such a big capability. Certainly the leader of the pack so far!

Now for the PC speed test... and this is where things fell over. Working on a WindowsXP based PC, running an average number of background tasks relevant to a photographer or graphic designer (such as Adobe Bridge, WinAMP (for inspirational tunes), AVG AntiVirus, and a few basic hardware tweakers to control laser mouse etc... we wrote 2 gigs of mixed media to the card, and after performing the test 5 times, it averaged out to a measly 2.73mb/sec... reading the data back off averaged out to a slightly better 3.49mb/sec... hardly even close to the 40mb/sec mentioned by the manufacturer.

It seems that 'ideal conditions' require something not found on the average PC... a complete lack of anything else chewing up processor cycles. However, for the enthusiastic beginner, where the number of photos is minimal, waiting for 2 seconds per image isn't exactly going to cause you to miss a deadline... but professionals need to make sure they have their systems running at peak performance, and may wish to invest in a superior cardreader.

Overall, despite being about ten times slower than maximum rated performance on the PC, it's certainly fast enough in the camera, and that's where it can matter the most. It's a simple matter to delete a few extra, unwanted photos, but it's impossible to rewind reality and take a photo you missed because the buffer was overloaded.