« Journeys in the Dead Season review 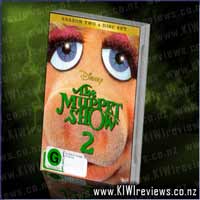 Disclosure StatementFULL DISCLOSURE: A number of units of this product have, at some time, been supplied to KIWIreviews by Roadshow (NZ) Ltd or their agents for the purposes of unbiased, independent reviews. No fee was accepted by KIWIreviews or the reviewers themselves - these are genuine, unpaid consumer reviews.
Available:
November 2007

Kermit the Frog tries to run a Variety show in the Muppet Theatre.

Working against him are Statler and Waldorf, the two heckler's who always were in the same balcony and Scooter's uncle who owned the theatre.

Miss Piggy, who was boosted to superstardom from this show, wanted to be a star and would do anything to get that, including karate-chopping anyone who got in her way.

Also includes ome of the often used skits such as Muppet News Flash, Pigs in Space, Veterinarian's Hospital, and At the Dance. Also included, the Muppets Valentine Special which first aired on ABC in 1974.

It's been 2 years since the release of Season 1, and I have been waiting (im)opatiently for this since then... and it was worth the wait. With a swag of famous faces, all the classic jokes, and plenty of my favourite character, The Swedish Chef, my son and I were giggling and howling with laughter for hours... and that was just the first disc!

Originally screening through the later half of 1977, this is packed with great comedians such as Don Knotts, Steve Martin, Peter Sellers and John Cleese, famous performers such as Elton John, Rudolf Nureyev, Bob Hope, Julie Andrews and Dom DeLuise, plus a host of others... stars famous to those who lived through the 70's and 80's... some of the stars were still shining bright well into the 90's, for the younger fans.

Overall, an excellent series, and great to sit and watch with the family. My son has become a firm fan of the Muppets, and it makes for a great weekend afternoon's entertainment when the sun is beating down like a furnace and going outside requires an SPF factor so high I lose count... or an honest desire to understand how a rotisserie chicken must feel... That's worth a purple banknote to me any day! The best bit is... there are still *3* more seasons to come!

Score: 10.0
Product reviews for listing 5417: Islands on The Edge
Type of Show: Documentary

Filmed over the course of a year, Scotland's enigmatic Hebridean islands are the stage of rock and water that offer unrivalled dramatic scenes of contrasting natural forces. From grey seals trying to protect their young from giant waves, to puffins, eagles and basking sharks, this is wildlife at its purest.

Filmed with pioneering underwater macro, aerial and infra-red cinematography Islands on the Edge delivers unrivalled richness of content about a landscape that few of us will ever have the privilege to experience.