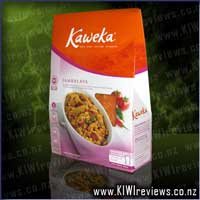 Disclosure StatementFULL DISCLOSURE: A number of units of this product have, at some time, been supplied to KIWIreviews by Kaweka Foods or their agents for the purposes of unbiased, independent reviews. No fee was accepted by KIWIreviews or the reviewers themselves - these are genuine, unpaid consumer reviews.
Available:
at quality retailers

The taste of New Orleans in this aromatic rice meal with hearty chunks of choritzo sausage and moist chicken pieces.

This flavour was so yummy according to my Hubby and mother. I'm not a great fan of spicy food so I only had one mouthful.

There is plenty for a meal for 1 in the packet and it is so easy to cook and smells so yummy!!.
There were nice big chunks of chicken and sausage. $7.00 for this meal.

I like having my meals cooked for me. I hate spending time at the stove trying to whip up an edible meal; so to have tasty "heat 'n' eat" meals presented to me is a real treat. Just two minutes in the microwave has a tasty meal which is well within my capabilities and no messy pans to wash up either.

The meal smelled divine, I ripped the top off the packet and eased it onto a plate. The taste was probably a little spicy for my liking; but not unbearably hot. The rice was cooked to perfection, soft but still having some bite. The chicken was moist and succulent; the chorizo spicy giving a nice balance to the dish.

This may be a dish I buy again when I need some spice in my life. My husband would prefer a vegetarian version. But we can ignore him.

I thought this meal was absoluely delicious. It had lots of chunky bits of sausage and chicken (as per the usual Kaweka quality), and the rice to sauce ratio was just perfect. It's quite enough on its own for a meal, and it is very filling and warming. It has a slightly unusual taste in that it might be somewhat heavily spiced for some people - ie if you don't do flavourful food, this is not right for you.
I loved it! Definitely one to keep in the cupboard.

Hmmmmmmmm spicy food. If my surname was Lister this is the sort of thing i'd have for breakfast on my cereal. However in this universe i'm more than content to have this for either lunch or dinner, in fact i'd happily have this as much as I could (well at least until the wife threatens to divorce me anyway

This meal like the other spicy type meals from Kaweka is not overly spicy so it will easily appeal to the masses rather than the small few that like having their mouths on fire whilst eating.

This is my first taste of Kaweka foods, and on the whole, I have to say I'm impressed...

I am a huge fan of spicy foods, and like to think I cook a pretty mean Paella - a spanish version of this type of dish - so was interested to see what they did with it.

On opening the packet, it looked like a semi-decent risotto should - moist, not gluggy or overly sticky - and as it microwaved it began to smell wonderful!
I nuked it for the 2 minutes recommended, but didn't feel it was quite hot enough, so popped it back into the microwave for another minute in the bowl to make sure it was piping hot (there is nothing worse than lukewarm rice dishes in my book!).

My first mouthful was an interesting mix of "Oooo... that's nice" and "Oh bugger, there's a wee bit of chemical taste to it" (which my partner noted too). After that first mouthful, the chemical taste kinda disappeared and I just enjoyed the food. The choritzo was tasty and in good sized chunks, the rice was well cooked - not over or under done.
I kinda felt that the chicken portions were too small, and got a little bit lost in the other flavours, but this isn't unusual in this type of dish...

All in all, I have to say that I would definitely eat this again!
Well done Kaweka :)

I LOVE Choritzo sausages, chicken not quite so much. So I was a little unsure of what to make of this combination in a risotto-style meal.

The thing I like about these meals is they can be used as a part of your overall meal and not just on its own. This is an excellent way to get people interested in this if they are stuck for menu choices

I removed the bag from the microwave, tore the pouch open and poured the meal into a bowl. My first impression was that it was a nice consistancy... The sauce to rice ratio was perfect.. The first few bites were ok, with a good amount of choritzo and chicken in each forkful. I don't know if I am out of the habit of eating spicy food or what, but as the meal progressed, I found myself enjoying it less and less. The spice of the choritzo made me thankful I had opted to have the Jambalaya as it was. I doubt I would have found anything to accompany it that I would have tasted past the spicyness.

Overall, not my favourite Although I do look forward to trying others in the updated range of meals.

I was really keen to try this product, as I love chorizo sausage and I love chicken, so I was bound to enjoy it. We served the Jambalaya as a side dish, and there was plenty for two. I heated it in the microwave in a bowl, and after two minutes it was ready. It smelled great! The texture and look of the product I would liken to a very thick risotto. I loved how there was so much choritzo sausage and chicken - every single bite we took had a piece! I've never struck this before with any heat and eat meal...ever! Its usually a case of one or two bites with the good stuff, and the rest just bland filler. Kaweka has made this product with the good stuff all the way through, and its wonderful. My partner doesn't really go for spicy foods too much, but he really enjoyed this, it did have a spicy aftertaste, but it didn't linger and was just right. The flavours worked wonderfully together. A great product!

After many years having to avoid food with too much 'kick' to it, I have recently started to re-explore the spicier side of dining life... and loving it!

With the release of Kaweka's newest flavours, I was keen to try the Jambalaya, since I have always enjoyed Choritzo sausages whether they be fried, BBQ'd or casseroled... and a risotto-style dish suits them really well.

As usual, heating was a s simple as nuke it for 2 minutes or so, then serve. The big difference that I found was that being a rice meal, you can choose to have it 'as-is' or with a side-dish according to your preferences. This, I thought, was an excellent step up in the quality and user-friendliness of the product.It makes the product very much heat'n'eat, but without removing the experimental possibilities for those of us who like to do meals a little 'outside the box' in style and ingredients.

After pulling the bag from the microwave, I tore the top off and poured the meal into a bowl. First impressions were that it was a nice thick consistancy... sticky without being gluggy or clumpy. This is a good thing in my book... I hate watery, runny rice dishes. The first few bites were impressive, with a good amount of choritzo and chicken appearing without having to be hunted for. An excellent ratio of meat, rice and sauce.

Further enthusiastic snarfing then ensued, with an empty bowl and a satisfied burp to show for my efforts 10 minutes later. (It pays to eat spicy-style foods slowly and chew well, to avoid unwanted spice-indigestion. Trust me.) I was really impressed at the full flavour, without the burn or unpleasant aftertastes so common with cheaper boxed versions that you still need to mess up a pot and utensils cooking yourself.

Overall, another excellent addition to the Kaweka clan... though not my overall favourite (that still goes to their classic bolognese) this was a stunning new release, and I anticipate much from the rest of the new range... those that I will be trying, at least. Well done Kaweka! Keep them coming!

We've sussed out these delicious almonds, thinly coated with dark chocolate and a whisper of freeze-dried berry. We've stripped some layers to go skinny on the chocolate but not on the taste. Our multi-packs make it easy to get your skinny on when you're out and about.