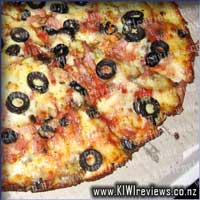 Disclosure StatementFULL DISCLOSURE: A number of units of this product have, at some time, been supplied to KIWIreviews by the company for the purposes of unbiased, independent reviews. No fee was accepted by KIWIreviews or the reviewers themselves - these are genuine, unpaid consumer reviews.
Available:
For a limited time

This pizza has been compared to others that just happen to have olives. That, I think is where the similarities end.

The garlic gives the whole thing a slight zing without being too over-the-top. The shredded cotto was a nice difference, as compared to beef or ham. The group I was with decided on went with The Edge crust for this topping and I think it was a great choice. All the flavour of the toppings right to the last swallow. None of that tasteless crust which usually ends up filling my bins till refuse day.

I look forward to the 'Powers-that-be' in Domino's HQ deciding this is worthy of adding to the increasing list of good pizza toppings. If not, c'est la vie, say the old folks, goes to show... as the song goes. LOL.

As a lover of Olives and Mushrooms I immediately guessed that this pizza would be a good choice. However this pizza actually surpassed my already high expectations. Previously my Domino's pizza of much loved choice was The Godfather. And sure, The Godfather is good, but the Capriosca from the new 70's Range beats it hands down. If you love olives and mushrooms this pizza really is for you. I'm fervently hoping that Dominos keeps this one and moves it onto the permanent menu. I know that I would be buying it every time.

Though I received some disagreement on this point, for me this was very similar to the "Godfather" in taste and texture, but with a slightly milder taste. Now, I suspect the similarities in flavour are caused by the influence of the olives, a fruit I am not a great fan of usually... but with a bit of a deft touch, and the indulgence of my fellow diners, I picked the majority of them away and dived in for a snarf.

Having this on the Edge Crust is an excellent investment, because you really do get plenty of the best bits: meat and cheese, and you don't end up with a rock-hard rim of crust to dispose of. (Although it does put an end to the perennial favourite beer-&-pizza-night game of 'Crusty Boomerang'

) I found the Cotto ham to be a really nice meat variant, though I think I prefer something a little more beefy. The Godfather has pepperoni, this has ham... maybe a version with spicy beef mince would be a good one to try next?

Overall, yet another winner... not their best ever, but running up with the head of the pack for sure. Full flavour, no over-spicyness, not drowned in sauces... excellent.

At Proper we wanted to bring you a Popped Corn with a difference. Yes! A partial popped kernel-bringing you the perfect crunch in each munch. We think it is so moreish, that we decided it was worth sharing one of the oldest snack foods of the Americas, with New Zealand.