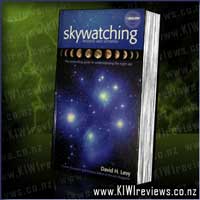 Disclosure StatementFULL DISCLOSURE: A number of units of this product have, at some time, been supplied to KIWIreviews by Five Mile Press Ltd or their agents for the purposes of unbiased, independent reviews. No fee was accepted by KIWIreviews or the reviewers themselves - these are genuine, unpaid consumer reviews.
Available:
April 2007

A comprehensive and indispensable guide to the magic and mystery of the slies, with practical information for all amateur skywatchers.

•  Updated information about recent astronomical discoveries.
•  Up-to-date statistics, distances and measurements.
•  New chapter on recent discoveries of new planets outside our solar system.
•  Hints on using computers, the internet and digital cameras for amateur astronomy.
•  Fact files provide fingertip facts about astronomical phenomena.
•  Sky maps and maps of all the constellations.
•  Fully illustrated throughout with hundreds of illustrations, maps and photos.
•  The perfect amateur astronomer's handbook.

Astronomy has been an interest of mine since childhood, when I first experienced the wonders floating around us, courtesy of the One Tree Hill Observatory in Auckland. After seeing a close-up shot of Mars, it was hard to ever forget that those tiny specks of light in the night sky are stars, just like ours, most of which have some form of planetary family around them... there's life out there... we're part of something so vast we are only just starting to catch glimpses of it.

As long as mankind has recorded history, the stars, and the patterns we projected into them, have been a part of our species psyche... whether we have seen angels, demons, apostles, warriors or animals, we have always ascribed some meaning to them. Do they hold sway over us, or are they simply indicators of a cyclic time in our environment that shapes our nature? Is our future written amongst them, or is our future out there with them?

This book starts off with a history of skywatching in it's earliest days, through to modern machine-driven methods, including a timeline of the milestones of astronomy since the turn of the 20th century. This then progresses into chapter 2, which gives us an overview of stars and galaxies, what kinds of stars they are made up of, how they are going to evolve and eventually die or convert into other clestial objects, such as black holes or supernovas, as well as all sorts of other denizens of the great black deep.

Chapter 3 focuses on skywatching tools and techniques, ranging from simply going outside on a clear night and staring intently out into the lofty darkness, through telescopes and binoculars of varying sizes and degress of magnification, up to exploring by proxy using the internet. Chapter 4 takes us through how the sky is changing, whether actually so, or just our perception of it. Chapter 5 is a guide to the sky, which is really where the skywatcher is going to find the best info, since it is packed with starcharts and skymaps.

Chapter 6 gives us a tour of our solar system, and the bit I liked the most about this chapter was that is reflects the changes in status of the various bodies in the aftermath of the astrophysics conclave that demoted Pluto to being a Dwarf Planet, and reassigned labels both old and new. Thankfully, we still live on a planet.

A rose by any other name, still needs a ball of dirt.

Chapter 7 is the most speculative, being as it is an exploration of the greater universe. Of course, since this is skywatching and not sci-fi, it's all about the visual exploration, although it does end with a couple of pages on possible life in the universe, which of course contains many sci-fi references. At the end of this is a comprehensive factfile that includes such handy tables as a predictive set of solar and lunar eclipses for the next 9 years. (I was very happy to see that on Feb 7th 2008 we will see a partial solar eclispe

, but no lunar eclipses at all in the next decade.

) There is also a section on biggest/greatest/largest/etc... facts and stats on comets and asteroids, unmanned space missions in the past, etc.

Overall, another great book in the series, and an excellent addition to the reference library. If you have any interest in stargazing, then you should shake the moths free from the wallet and go get this book. If I had one small complaint, it is that there is so much information in this book, it can get a bit overwhelming in places.

The final instalment of this fabulous, bestselling series.

The Tide Lords have gathered in Jelidia to find out the secret of how to kill an imortal ... Cayal in particular. Before they can do this, however, they must find the Chaos Crystal that brought them to this world.

They initially head to Glaeba, where Arkady has been captured by Jaxyn. She escapes and flees to Caelum, where ... more...