ProdID: 1146 - Over the Hedge
Directed by Disney DVD 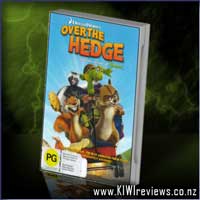 Over the Hedge product reviews

Taking back the neighbourhood... One snack at a time.

Spring has sprung and Verne and his woodland friends awaken from their long winter's nap to discover that a tall green "thing" has mysteriously cropped up right through the middle of their home. Enter RJ, an opportunistic raccoon, who explains that the world beyond the hedge is the "gateway to the good life" where peculiar creatures called humans live to eat, rather than eat to live.

Suspicious and even a little jealous of RJ, the ever-cautious turtle, Verne wants to keep his blended family safely on their side of the hedge. But, proving the adage that one man's garbage is another man's - or rather, animal's - treasure, the manipulative RJ tries to convince the woodland band that there is little to fear and everything to gain from their over-indulgent neighbours. Eventually, RJ and Verne form an unlikely friendship as they learn to co-exist with - and even exploit - this strange new world called suburbia.

I hadn't really heard about this movie but came across it really cheap a couple of years ago in the Warehouse so decided to buy it for my daughter. I think I got it for about $10 so it was almost as cheap as hiring it out so a really great buy as it has been viewed many times now.

It really makes you think about your actions as humans as a bunch of critters find that all of a sudden their homes have been changed and decide to move in to the humans homes in order to find food. What follows is some hillarious antics as the critters drive the humans nuts in their escapades to find food. I think it is highly topical these days with children being taught to be more aware of their environmental impact.

Soem great morals in the story line too as new unlikey friendships emerge between characters where the characters learn that their own desires are not as important as the desires they share with each other so a real heartwarming tale. A lot of humour in the movie to as the exterminator tries to get rid of the animals only to catch himself in his own traps time and time again. A great movie for the whole family to enjoy as some of the humour would just go over the children's heads but is great for adults.

Dreamworks have done it again!!
I wasn?t so sure if I would enjoy ?Over The Hedge?, but decided to give my son a treat by taking him to the movies to go and see it. With it?s delightful cast of animated characters, gifted with such famous voices as Nick Nolte, Bruce Willis, William Shatner, and Avril Lavigne, the movie had me hooked from the very beginning.
When steady, sensible Verne?s turtle tail starts tingling the instant he meets RJ, a raccoon on a mission to replace all the food his mate, Vincent the bear, had stored up before RJ caused it to disappear down the mountainside, he sets out trying to convince his friends to forage for their winter?s supply of food the old fashioned way, while RJ does his best to show them a better and quicker way? which means venturing over the hedge, into ?human territory?.
The combination of hilarious animal antics (my favourites tending to be the ones with the rather hyper Hammy, the squirrel who is totally hooked on cookies, and who totally adores RJ), a rather enjoyable soundtrack, and the dealings with some rather important every day issues (trust, old traditional ways versus new modern methods, responsibility, and friendship) all make for a thoroughly enjoyable movie that I can see becoming a regular in the DVD player - both with me, and with my son!! LOL!

A love letter and hate mail to the alpha male.

This story's alpha is Mitch who lives buried in suburban London, having turned his back on his previous life of casual violence and intimidation as part of a legendary South East London firm.

In the modern day he's the doyen of respectability and quiet confidence. The Guv'nors holds a mirror up to Mitch and shows him his inner monster once again, buried deep in both DNA and psyche, desperate to break out and wreak havoc.