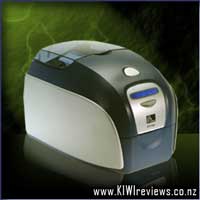 Disclosure StatementFULL DISCLOSURE: A number of units of this product have, at some time, been supplied to KIWIreviews by Comworth Systems or their agents for the purposes of unbiased, independent reviews. No fee was accepted by KIWIreviews or the reviewers themselves - these are genuine, unpaid consumer reviews.
Available:
online or at selected retailers

The P110i prints sharp, readable bar codes, ID photos, graphics and text, edge-to-edge, in seconds. That means you can issue personalized cards on the spot. Its space-saving, small footprint design is the perfect choice for desktop and countertop applications.

The ribbon cartridge is very easy to load and the 16 digit LCD display provides information as required. Warranty is one year return to base.

It wasn't too long ago that ID cards took a while to get sorted, as they often had to go off to secure, commercial printeries for processing. With the advent of smaller, more portable CMYK+ film card printers, printing small-run individual ID cards became a viable option for small business, educational establishments and even for community organisations requiring some for of hard-to-fake ID.

Introducing, at the lower end of the market, the Zebra P110i. This unit will print credit-card sized ID's, as well a range of other plastic goods such as sets of luggage tags, in full colour at 300dpi, giving you photographic ID cards at a very affordable rate, even if you are printing just one at a time. For the test runs, I designed a range of photo ID cards, non-photo ID cards, and some luggage tags as well. These were all full colour, some single-sided, some double sided.

Installation was pretty simple, with an included CD containing all the drivers and software required, though the printer installs into Windows with a normal printer driver, so is accessible from any print-aware application, such as Microsoft Office or Adobe Photoshop as well. I did have one small glitch where a power surge reset my PC during installation, and this caused a duplicate printer to appear upon reboot and reinstall, so be aware that this may happen under some circumstances. No harm done, and I would recommend a full UNinstall of both printer devices, reboot, and reinstall of the software to eliminate confusion at any future stage.

After installation, I would recommend a full monitor/printer colour calibration be performed, as I found that the printer can render somewhat faded and dull colours if this is not done properly, however, if you aren't too fussy or worried, the default colour-shift is minimal and quite within acceptable limits in most situations. However, you should also be aware that under some circumstances, the colour registration may also be an issue, as I found the Black overlay was off-registration by about 1.5mm on many cards. Tweaking may be required on some units.

On this issue, when I was printing some of the 3-set of luggage tags, the registration shift and 'ghosting' was quite noticable on the middle and last tags, but the leading-edge tag was quite excellent quality. This may be due in part to the large triangular gaps at the top edge of the tags causing the film to distort during printing.

Printing time was quite impressive, with a set of 6 identical ID cards taking less than 2 minutes from 'send' to 'finished', and they were full-colour with a clear overlay, so 5 passes per card. With the addition of a hologram foil, you could easily expect to clear an entire small company's worth of ID cards in a single afternoon. Considering this, small businesses may want to explore the options of taking on the job of printing the ID cards for nearby businesses, and thus helping to pay off the cost of the printer a lot faster, though the savings over outsourcing the job to a commercial printery would more than justify the purchase anyway.

Overall, I was quite impressed with the results of this unit, and I would think that the small glitches and niggles could easily be explained by the fact that this was a well-used demo unit, rather than any failure in the design or manufacture of it. The only caveat I would offer though, is that this method of printing could lead to security issues for larger businesses. The film cartridge should be destroyed in a high-paranoia manner, as a clever crook could make great use of the depleted cartridge. I found that with some careful tinkering, I was able to reconstruct a fully-viable ID card by scanning the 4 colour films and re-combining them into a full-colour image in Photoshop and printing off something I would assume to be a suitable fake ID card. Of course I was careful to destroy the resulting card most completely, but it highlighted a potential issue for those with high-security needs. When it's finished with, make sure to burn the films to prevent any awkward issues later down the track.

Get a major boost in PC throughput with the intelligent performance of the Intel Core i5 processor, which automatically allocates processing power where it's needed most. You'll move faster when creating HD video, composing digital music, editing photos, and playing the coolest PC games. With the new Intel Core i5 processor, you can multitask with ... more...