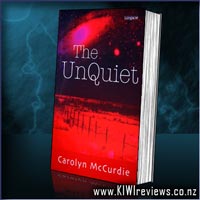 Over the galaxy, a strange, deafening tide is flooding.
The planet Pluto disappears. Creeping in from between star systems is the Unquiet. It stinks like a million burning tyres, and it jabbers and screams as if the sky is in agony. Soon it attacks the earth: swallowing entire countries.
A second, smaller power seeks out Tansy, a young girl in a town at the bottom of the world. She has a gift. The earth urgently needs that gift, and it also needs the knowledge that a boy called Anaru holds. Together Tansy and Anaru - with guides from another realm - travel far into the heart of the earth.
What will they discover there? How can they help to stem the world's great unrest?
Calling on great myths of the world, The Unquiet is a spellbinding story that cradles a deep peace at it's core.
"There's only one planet that weaves into its spinning the wild thread of imagination. It touches everything we know."

This book was designed for a much younger reader than myself, so please keep that in mind.

I loved that NZ myths were involved in the story as well as other myths from around the world - equating Maui with Loki the Trickster. I enjoyed some of the descriptions and scenery.
I found this book slightly flat. I found it difficult to remain interested in the story, and found it difficult to be sympathetic with one of the main characters. I also found that in a lot of ways there was never quite enough story there, like it was missing things. I feel that rather than children enjoying this story and becoming involved in it they would treat it like a book they had to read for school.
Overall I didn't hate it, but I wouldn't read it again in a hurry.