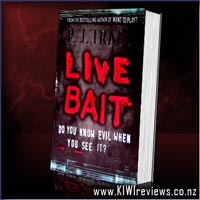 When elderly Morey Gilbert is found lying dead in the grass by his wife, Lily, it's a tragedy, but it shouldn't have been a shock - old people die. But when she finds a bullet-hole in his skull, the blood washed away by heavy rain, sadness turns to fear. It looks like an execution... and soon a whole city is fearful as new victims are found killed with the same cold precision. All elderly. All apparently blameless.

Detectives Magozzi and Rolseth race to uncover a connection, and their best hope of doing so may be Grace McBride, beautiful, damaged survivor of an earlier killing spree. And the answers, it seems, are buired in a terrible past.

Filled with the same cracking dialogue, pace and rich, vivid characters as the author's debut, Want to Play?, P.J. Tracy's Live Bait is an electrifying thriller that explores the chilling extremes of evil and retribution.

After reading the first book I was wondering if this would fall victim to Sequelitis... that unfortunate situation that occurs when the sequel falls short of the high standards set by it's predecessor. I was so happy to discover that this wasn't the case. Though it has many of the same characters, Detectives Magozzi and Rolseth, and the Monkeewrench team, the new characters introduced really stood out as the highlights. OK, I'll admit that Magozzi, and McBride are the real core team in this book, but they play equal billing with the sone of the first victim, the ex-Cop who is also entangled in case, and of course, the anonymous perpetraitor.

With the same high level of suspense, an amazing twist at the end, with another stunning twist right on the tail end as well, this book kept me guessing right to the last minute. I admit to being just as lost as Magozzi and Rolseth were right up until the cliffhanger shoot-out... and the final twist took me entirely by surprise. However, in hindsight, it seemed a little 'tacked on at the last minute' because it really didn't seem to be led up to, just popped up when you were looking in another direction.

I was intrigued by the way Magozzi's instincts would over-rule his thoughts and lead him, apparently in the wrong direction, in line with the evidence... and yet... intincts are older and wiser than we are, and we should listen to them more often it seems...

Overall, this is another stunning novel from an upcoming author who is showing great potential right off the bat. The bar has been set high indeed, and I look forward to her third book to see if she pushes the bar higher. Keep it up!

A new story collection featuring 26 adventures across time and space!

The Heroes and Monsters Collection brings together our favourite short stories from the last ten years of Doctor Who. In these tales the Doctor and his companions face the Daleks, the Cybermen and many more terrifying foes. Also includes three brand-new stories for 2015, featuring the War Doctor, Clara and the Twelfth Doctor.

With all the humour and thrilling action of the iconic television programme, the Heroes and Monsters Collection is a wonderful read for any Doctor Who fan.