Home > Categories > Books > Non-Fiction > Getting Away With Murder: The Jennifer Beard Inquiry review

ProdID: 773 - Getting Away With Murder: The Jennifer Beard Inquiry
Written by Mark Price 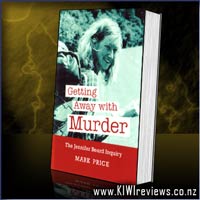 Getting Away With Murder: The Jennifer Beard Inquiry product reviews

Nineteen sixty-nine: the year Neil Armstrong walked on the moon, the Beatles sang 'Let It Be' and the period known affectionately as the 'swinging sixties' expired. It was also the year English hitch-hiker, Jennifer Beard, was murdered as she travelled a remote road near Haast Pass.

Armstrong, The Beatles and the sixties are famously remembered. But Jennifer Beard's killer is largely forgotten. He was never arrested, never charged, never judged and never gaoled. This man got away with murder.

At the time, the Jennifer Beard inquiry was described as the biggest manhunt in New Zealand's history. More recently it's been called a crime that marked this country's loss of innocence.

In Getting Away With Murder, Author Mark Price traces the journey not only of the murder victim, but al;so that of the prime suspect and the many eye-witnesses involved. He reveals evidence never put before a jury and examines the reasons why the prime suspect was never charged.

Getting Away With Murder is a fascinating story of the murder of Jennifer Beard and the subsequent police inquiry. It also vividly captures what was considered a more innocent time - or was it?

This is an extremely thought-provoking book (I prefer not to say enjoyable, bearing in mind one person died, and the other, as the title says, got away with murder); however, I must say I did find the book compulsive reading and that was enough to make me want to finish the book.

The book was generally laid out in chonological order, and was mostly logically presented, though at times I did find it a little disjointed in places. The chapters are short (two to three pages on average) making it an easy read, and can be dipped into when one has a few spare minutes. There are a few black and white photographs in the book - family photos of some of the key witnesses in the book, photos of the locations in the book and a few of evidence presented. Only one of the photos (the one of the Fiji commandos) seemed a little out of place - unless it was a photo of Bray. I am sure there could have been a better or more relevent photo in its place.

The author (Mark Price) has made good use of whatever resources were available to him, he interviewed a number of the key players and witnesses involved in the investigation and brought in a number of other interesting asides about key figures at the time. I felt it added another dimension to the book rather than detract from his work. It give almost a 'time capsule' like quality in bring in other news worthy events from the late 60's and early '70s

For me, the main interest in the book is the investigation process itself, and just how much witnesses can change their story, and over time facts get distorted and time embellishes the information the key witnesses hold, and to some degree the witnesses cobble together information they have read in the newspapers, and to a certain point, to tell the police what they want to hear, rather than the facts. From this point of view, it shows just how hard the investigating officer's job was at the time of the murder and in the months that followed. It was interesting to read that officers would have done things a little differently had they known what the outcome would have been.
The book also presents the reasons why no-one was brought before the courts and charged with murder, and this is interesting in itself.

Bray was the main suspect, and the book does state that clearly, however it also presents what I feel is a balanced view about the whole investigation. Bray denied his involvement until the day he died and the case remains unsolved.

This book would not interest everyone, and that is a fair comment; however, it did interest me on many levels, and I can really recommend this book to anyone who feels like a real-life 'whodunnit' to read. Mark Price has really done a stirling job and it is unlikely to be outdone by any future authors.

An idyllic summer holiday in 1969 ends in tragedy for an English teacher who had a love of nature and hiking. As complex as her mysterious death is in this book, it shines light on how, if the wheels of justice had been turning a little better, the killer would have been caught.

I found the storyline to be increasingly confusing, disjointed and frustrating. The author chose to include eye-witness accounts from people who mostly met Jennifer in passing or for a short time before her death. Also distracting was the way the historical information jumped to eye-witness statements and back to describing the local area and how it used to be back in the early 1900's. This left me with a "Huh? What just happened here?" feeling.

Overall, not a great read for me. May suit someone who enjoys more of an in-depth brain-twister.

•  Best-loved song, now a beautiful book with a cuddly lion plush, to treasure forever
•  Includes CD with recording by ... more...