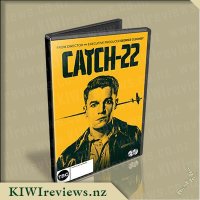 Artful dodger Yossarian is a bombardier in the U.S. Air Force during World War II who is upset that thousands of people who he has never met are trying to kill him. His biggest problem isn't the enemy, though, it's his own army that keeps increasing the number of missions soldiers must fly in order to complete their service. And if Yossarian tries to make an attempt to avoid his assignments, he will be in violation of catch-22, a bureaucratic rule that states a man is considered insane if he willingly continues to fly dangerous missions, but a request to be removed from duty is evidence of sanity and makes him ineligible to be relieved of his duty. Oscar-winner George Clooney serves as an executive producer of the six-episode series, which is based on the 1961 novel by Joseph Heller.

Now, this is a peculiar series. The premise alone looks so incredibly convoluted in how it is written, that if I hadn't seen George Clooney was involved as a director, I probably would have looked over the entire series. 'Catch-22' is a satirical, dark comedy miniseries based on the novel of the same name, written by Joseph Heller. The series stars the likes of George Clooney, Kyle Chandler, and Hugh Laurie, but the real performances come from Christopher Abbott and Daniel David Stewart.

The premise is based around a catch-22. A bomber pilot who doesn't want to keep risking his life in war. Continually choosing to fly life-endangering flights is insanity which means he could be sent home, but the act of asking to be sent home means he is choosing not to fly dangerous flights and therefore sane, meaning he has to keep flying. Effectively the story is that of a pilot trying any means possible to get himself taken off of missions, or sent home.

It's a curious premise, with the audience initially having the impression that John "Yoyo" Yossarian (played by Christopher Abbott), is simply a coward. As the series progresses, however, the events that occur can be seen to be taking their toll on everyone involved. This transition of Abbott's character from an overconfident, unlikeable coward, into a sympathetic character that is simply trying to survive, when he is facing death in the face every single day. The initially unsympathetic nature of his character does mean that it takes the audience a few episodes before they are fully engaged with Yoyo, but his ragtag team of cohorts do help to keep the interest until that point is reached.

As this is a war drama of sorts (the majority of time is spent on the base) the appeal comes not from the action, but from the dark humour and dry wit. There are a number of very dark events that occur (including sexual assault, murder, and suicide) but like the unavoidable conscription during war times, the show isn't so much focusing on the acts themselves, but how the acts affect or team of bomber pilots and gunners. Some times the comedy will be simple wordplay such as the events involving "Sgt Major Major Major", and other times it comes from the hatred that these characters have for each other, or the hooligan-esque escapades that some characters get up to. It's a variety of comedic elements that haven't really been explored much in modern media (except for shows like 'M*A*S*H' or 'Hogan's Heroes', and I wouldn't necessarily call them modern).

This is a well-produced period piece, with very convincing set designs and environments, costuming, even taking such things as dialogue choices into account to ensure there was a strong war-time aesthetic. The colour-grading was also very helpful in creating a strong aged atmosphere that also worked well within the "military" colour themes.

Watching Yoyo Yossarian trying, again and again, to get out of these bombing runs is a slow process that gradually endears his character with the audience. Almost like a whodunnit, the audience are walking alongside the character, trying to figure out new plans, and decide whether his actions will work. Some look like they would work, some have hard-hitting consequences, and after a while, it becomes clear that it is not only bad luck that is holding him there. The story (unlike the book) is linear, which works much better in this visual medium. There are certain story elements that aren't fully realised and subplots that are disregarded after they gain the right amount of laughs from the situation. Catch-22 is entertaining, and by the end, it will have you hooked, but it is far from perfect storytelling.

Teletubbies is designed to encourage young children to watch television creatively. Full of fun and exploration, it inspires confidence and curiosity and nurtures childhood development.