« I Am Jellyfish review 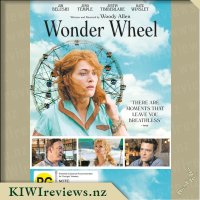 Wonder Wheel tells the story of four characters whose lives intertwine amid the hustle and bustle of the Coney Island amusement park in the 1950s: Ginny (Kate Winslet), a melancholy, emotionally volatile former actress now working as a waitress in a clam house; Humpty (Jim Belushi), Ginny's rough-hewn carousel operator husband; Mickey (Justin Timberlake), a handsome young lifeguard who dreams of becoming a playwright; and Carolina (Juno Temple), Humpty's long estranged daughter, who is now hiding out from gangsters at her father's apartment.

Poetically photographed by Vittorio Storaro, Wonder Wheel is a powerful dramatic tale of passion, violence, and betrayal that plays out against the picturesque tableau of 1950s Coney Island.

The 1950s Coney Island backdrop, together with the splendid soundtrack offering an almost continuous backing of fairground music, adds to the melodramatic dimension of this movie. Annoying though it may be at times, it offers the brash, unreal ambiance of a fantasy world. Given their lifestyles, it is appropriate that Humpty and Ginny actually live above and within this carnival atmosphere, with invasive sounds that can never be completely silenced even when all the doors and windows are closed.

The characters are quite one-dimensional in true melodrama style with the exception of Jim Belushi's character Humpty, whose attitudes change according to the situation - he goes from intolerant, possibly abusive and certainly overbearing boor to protective father to almost sympathetic family man. By the end of the film, the implication is that he is willing to accept people as they are, even compromising to accept his role in life as fate has dictated.

The other actors, although presenting polished performances within their individual roles, are limited by the predictability of their characters. There are also questions posed which are never answered - like the rationale for Richie's pyromania, the fate of Cassandra (Juno Temple), or the reasons for the choice of Mickey (Justin Timberlake) as the all-seeing narrator as well as one of the main protagonists - roles which sometimes appear to clash.

Kate Winslet (Ginny) plays a sad housewife and waitress with dreams of a life beyond her capabilities. She is caught up in a continual struggle to rise above her boring existence and make a name for herself in the theatrical world. Winslet portrays her character's negativity to perfection, conveying her resentment through her perpetually downtrodden attitude.

Juno Temple's portrayal of the unlucky Carolina is controlled and low-key. Despite her background as a gangster's wife now in hiding from the mob, she comes across as very young and innocent, almost as though she has been manipulated into some unfortunate decisions through no fault if her own. It is difficult not to feel some sympathy for her as she continues to get involved in yet more inappropriate activity.

Justin Timberlake as the narrator offers humour and insight into the action, lightening up some of the more sombre moments. However, the switch from narrator to the character of Mickey does not altogether work for me. I would have preferred to see two different actors cast in these roles so that they were more clearly defined.

Richie (Jack Gore) is delightfully antisocial, possibly evil - certainly a sociopath. The scenes where he casually plays with fire are chillingly realistic; I thought these were some of the most effective moments of the film. At the same time, there is no character development, no perceived solution for what must be a very damaged little boy.

The best parts of this movie were the cinematography and the soundtrack. The actors' performances were solid but I would have preferred more resolution and certainly more character development for all of them. As it was, I felt vaguely disturbed by the ending. It reminded me of a choose-your-own-adventure where the viewer has to fill in the missing bits for him or herself. A pity as there were some fine performances by the individual actors despite the challenge of the script.

Will Henry is a graphic novelist and a professor in NYC. At his adorable twin girls' fifth birthday party, Will's life is turned upside down when he walks in on the mother of his children, and longtime girlfriend, Charlie, with their friend Gary. One year later, Will is still alone and trying to put his life back together. He finds unexpected challenges when his talented student Kat tries to set Will up with her accomplished mother ... more...