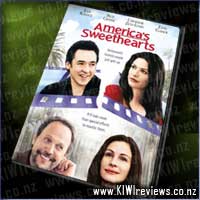 Disclosure StatementFULL DISCLOSURE: A number of units of this product have, at some time, been supplied to KIWIreviews by the company for the purposes of unbiased, independent reviews. No fee was accepted by KIWIreviews or the reviewers themselves - these are genuine, unpaid consumer reviews.
Available:
April 2002

Hollywood's darling couple Eddie and Gwen are America's sweethearts on screen, but off camera it's a different story. So now it's up to their press agent and assistant Kiki to pull off the ultimate deception - to promote the pair's latest film while keeping the media away from the real story!

America's Sweethearts was cute, if a little bizarre. The story of Hollywood's darling couple (think maybe Brad Pitt and Jennifer Anniston before the break-up), Gwen (Catherine Zeta Jones) and Eddie (John Cusack) starred all the big romantic films until their breakup (Gwen cheated on Eddie with some Spanish guy and Eddie tried to run them over with a motorbike). Fast forward to about a year later and Eddie has undergone serious therapy while Gwen is being hammered by the media and the public for breaking the poor guy's heart. Now their last movie together is being released and the studio's publicist (Billy Crystal) is charged with getting these two actors back together and pretending to get along in order to sell the film.

At first I thought this film would be about the couple realizing they really were made for each other after all, but that would have been too predictable. Instead, we are introduced early on to Gwen's ever faithful assistant and sister, Kiki (Julia Roberts) who has been secretly pining after Eddie since before the break-up. Now, you can probably guess how the story goes. I didn't mind the predictability, actually. John Cusack was cute as the somewhat insane, lovesick ex-husband while Catherine Zeta Jones was admirably stuck up and desperate all at once. Billy Crystal's character reminded me a bit of Robert De Niro's brilliant role in 'Wag the Dog' - a film I highly recommend seeing, by the way, and Julia Roberts seemed very much herself, as far as her romantic comedy roles go.

The ending, I think, was a little bit "Oh, okay then" It was missing that certain 'swoon' factor that makes the great RomComs truly brilliant, but still a perfectly acceptable watch if you're running out of ideas for a nice girl's night in.