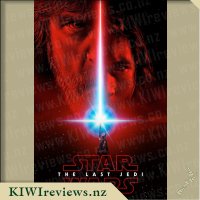 Luke Skywalker's peaceful and solitary existence gets upended when he encounters Rey, a young woman who shows strong signs of the Force. Her desire to learn the ways of the Jedi forces Luke to make a decision that changes their lives forever. Meanwhile, Kylo Ren and General Hux lead the First Order in an all-out assault against Leia and the Resistance for supremacy of the galaxy.

Star Wars is one of those franchises that has been around for so long, with so many different directors, across so many different media, that everybody has their own image of how the franchise should unfold. It has gotten to the point where it is nearly impossible to watch the original trilogy because of how dated the effects are (granted they age a lot better than many other franchises as so much of it was physical effects and not digital), as every "prequel" movie involves such a drastic improvement in graphics. When you consider the amount of time that has passed since the prequel trilogy ending and Disney's run of Star Wars films beginning, there have been 65+ Star Wars novels and adaptations, and 18 seasons of animated Star Wars shows that all occur between the cinematic films. So depending on what the fans have read or watched, will affect what they expect the next big Skywalker film to be like. So there is ultimately a lot that could be spoken about in this film. Every aspect of this film has been hotly contested among fans, and the film has been called amazing, life-changing, a travesty and the most confusing thing released.

Generally speaking, the film is split into 3 main intersecting story arcs. Luke Skywalker and Rey, Finn and Rose, and Poe & the Rebels.

One of the big complaints about the film comes from the pacing of the storylines, with Poe and the Rebels having an exciting opening scene, and a great scene before the climax, but the two hours in between are slow and poorly written. When I first saw the film in the theatres, the person sitting next to me played on their phone at least once every ten minutes until halfway through where they sighed got up and left. There are definitely parts that are slow. And with command structures and communication levels how they are, it is very easy to see why the Rebels are on the backfoot. The Last Jedi is also the movie where you learn more about Poe's gung-ho attitude and the realistic effects and consequences of such behaviours. But the arc led to the climax brilliantly and included a very awesome scene from Vice Admiral Holdo.

One could argue that Finn and Rose's entire arc was unnecessary, unlikely, and served no purpose beyond introducing a rather well-done character portrayed by Benicio del Toro. You have to love the idea of a long time ago in a land far away, there being a casino. It's one of the aspects that really pulls you away from feeling the true multicultural nature of the Star Wars universe, and starts making it look like Disney is taking a more human-centric approach.Trying to force a "diverse" love interest also feels incredibly lazy from the writers.

And the final protagonists, Luke and Rey. They probably had the most interesting arc, which raised so many more questions than it answered, but it too was full of unnecessary scenes. Why do we have to watch Luke milking a creature and drinking it's "milk"? But we end up with answers to Kylo Ren's beginnings, and an introduction into force projections.

It is strange to say it after his lacklustre performance in Episode VII, but Adam Driver's Kylo Ren really is the standout performance of the movie. His character remains the only character to really get any proper development and whose allegiances remain clouded. With some great fight scenes, and the whole "will they, won't they" arc going on with Rey, it is almost good enough to make you forget about the anticlimactic mess that is Supreme Leader Snoke. The less said about that the better.

Everybody had been waiting patiently to see what is going on with Luke Skywalker and why he ran off, and the climax of the film is one of those points that people argue about because it was done so well. Fans try to nitpick the scene because they didn't see it coming. My only complaint about the climax comes from the fact that it was so short. There have really been very few full land battles in these latest Star Wars films. It has been either one-on-one or epic sky battles. So I got my hopes up for something huge but was let down by the scale of it.

The effects were great, no issue there. But the length of the film. combined with how little really happens in the plot makes the film feel very slow. The rebels are trying to escape the empire at the start of the film, and they are trying to escape at the end. Things occur in the middle, and losses are received by both sides, but that is the general gist of the plot. Not all that thrilling. So the film will be better received by a Star Wars fan, who will pick up all of the minor details and easter eggs, and they will love the audio commentary that goes with it in the special features. But for the regular moviegoer, it may not provide the consistent action that they need to remain engaged.