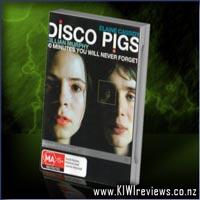 But days before thier 17th birthday, the perfect balance of their world begins to shift. Pig's sexual awakening and increasing jealousy begins to threaten their private universe. Unable to contemplate the loss of Runt, Pig's unpredictable nature spirals out of control in a trail of violence and destruction.

The inseparable are about to separate, and which one will survive will depend on which one can break free. 90 minutes you'll never forget.

There are not many movies out there that have what it takes to make a striking impression on me... but this was sure one of the top doozies! A disturbing hour and a half long insight into a world that is twisted into something that suits a psychopath nicely.

Pig is the leader of the duo, he sets the tone, instigates the events, has the plan... Runt is his eager symbiont, she is a part of him, a part of him. Or so it seems. As time goes by, Runt starts to wonder if her life really DOES need to be subsumed into the-world-that-is-Pig's... a world full of needless violence, pointless abuse of those weaker, of alcoholic blurs...

As her indepenence grows, Pig starts to lose it big-time, driving a wedge further between them. This is where things get REALLY disturbing... to the point where he basically flips out, and his world collapses around him until only the most extreme actions make any sense... and lead him towards the thing he fears the most... being alone.

Overall, this movie is quite possibly the scariest 90 minutes I have watched on a screen... ever. Never has a movie so freaked me out to this degree. I found it chillingly compelling, After about 20 minutes, I didn't really want to watch it, but I couldn't stop... I had to see where it was going, I had to see what became of Pig and Runt... if you like movies that twist your head a bit... this is right up your alley.

Dead Space is a feature length horror/sci-fi animated movie based on the much anticipated Electronic Arts video game set for release in October 2008. Dead Space will serve as a prequel to the game and will take adult animated horror to a whole new level.

When a deep space mining operation discovers a mysterious alien Marker, some believe they have finally found evidence of our creators. However, with the removal of the Marker, a ... more...