Home > Categories > Books > Kids - General > If I Had An Elephant review

ProdID: 7511 - If I Had An Elephant
Author: Richard Fairgray & Terry Jones 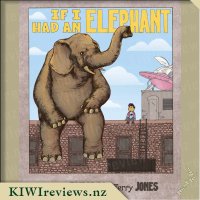 If I Had An Elephant product reviews

If I had an elephant for a best friend, there'd be no stopping us! We'd get matching jackets. We'd build a time machine together. We'd have OUT OF THIS WORLD adventures.

IF I had an elephant.

Beautiful large-format, hardback edition which will appeal to children with an offbeat sense of humour.

If I had an elephant was eagerly grabbed as we headed to bed for a new book to read and already Master 4 was rattling off all the things he thought would be amazing about having his very own elephant. I mean who wouldn't want an elephant?

As we started on our journey through the first couple of pages there was lots of "stop mum" so we could look at the pictures and master 4 could point out the various colours or discuss the "how" of the scenario's and whether indeed that would be something he would do - he particularly loved the idea of being able to get up high into the pantry to find all the best biscuits.

Sadly for us after the mid point the story-line got muddled and "boring"; the imagination can take you a long way but when the time machine starts to go to strange lands that are a mouthful to say the interest got lost and master 4 looked, well, confused.

We persisted again with it on night 2, they say repetition is key, but again at the back end the story lost it's way and despite the wonderful illustrations, which really were the talking point for the entire book, it wasn't enough to hold master 4's attention and on night 3 I was dished up a NO at the suggestion of giving it one more try.

Conceptually we loved the idea and the first few scenarios were great, hanging upside down and wearing matching jackets got the best reception but for us it was probably just a step to far in the imagination scale, no rhyming and not a necessarily roll-off your tongue easy read.

I am such a lover of children's books having trained as both an early childhood teacher and a primary teacher I am always on the look out for new quality children's books. I can not enter a store selling books without spending hours browsing the new release titles and I am always looking at books that would be good for my 5 year old who has just started school.

We spent a while looking at the cover and imagining before we started reading which was pretty cool as I think it is important to think about things before you begin reading with children to stir up a bit of interest and questions. Reading through the book we soon learnt what it could possible be like if you were to have an elephant as a bed and we found it very cute and very amusing that if we had an elephant we could do many cool things and my 5 year old thought it would be amazing being able to reach all the stuff up high.

The elephant could reach the cookie jar off the top shelf and my 5 year old thought this would be great to reach the lollies that mum hides up high because his pet dog certainly couldn't help with this like an elephant could. We laughed and laughed at how much fun it would be to have an elephant during a water fight, and decided we would definitely have the elephant on our team. It was so nice being able to imagine what we would do if we had an elephant and the pictures throughout made it very easy and appealing to see what it would possible be like.

As you get through the book you can see that the boy telling the story is just like us readers using his imagination to dream up about ideas of how cool it would be to have a pet elephant. We loved this and the begining and end image lead us back to the same place which was quite cleverly done. We talked about what our ideal pet animal would be and what it might do and decided that it is nice to imagine these things but maybe the cats and dog might just be the perfect pets for us.

This book is going to last us a while as it is appealing to younger children but also still appropriate for beginning readers as it has interesting language but in an easy to read format so while at the moment we can share it together I feel it is something he is going to enjoy reading to himself fairly soon as he learns to read more. The hardcover makes it perfect for young children and the large format makes it good for little eyes and hands.

Miss Nearly Nine Months has just started to take an interest in pictures. She watches her two sisters as they "read" their books and insists on joining in. As a result, she is a pushover when it comes to "quiet time" - she crawls over to any adult who is waving a book in her direction, pulls herself up, and demands to be shown the pictures.

Once she was settled ready for the story to begin, the twins came over too. While their little sister was happy to look at the pictures, they wanted the story read to them as well. They went to the zoo recently and saw a real live elephant and this was still fresh in their memories, so this made the pictures meaningful for them. The front cover hooked them in straight away; they thought it was perfectly normal that an elephant and a child would sit side by side on a roof. It is only adults that have a problem with that particular idea.

Next we looked at the two inside covers, one with a shadow and one with a complete elephant, both against a background of peanuts. This started a discussion on what peanuts were because none of them has as yet eaten a peanut so I had to explain what kind of food they are. They decided they were probably some kind of cereal, and I could not think of any better explanation, so we left it at that.

The situations presented in the book are familiar to the twins. Hanging upside down is something they do instinctively, and they enjoy water fights with their cousins. The idea of having an elephant to join in the fun just made the idea more appealing. Tuakana liked the picture of the child wearing the huge jacket as she and her sister love dressing up in Daddy's clothes, and Teina liked the picture of the elephant riding the bus to school. (They are at playgroup, but I explained that it is pretty well the same thing).

The Grumblepuff made the twins giggle, but Miss Nearly Nine Months thought it was the best picture of all. She giggled too, and did not want to turn the page. In fact, we had to backtrack quite a bit because she seemed to take a liking to some of the pictures over others. Although the colours are muted rather than the bold shades often used in children's books, the lines are cleanly drawn and there is plenty of white space - important for a little one who is still learning to make sense of pictures.

This is a large book, printed on glossy paper, so I wonder how long it will last. Little ones are often unintentionally rough when handling books; because it is a text that is likely to be revisited, I would have preferred a slightly smaller format with tougher paper. However, it is a hardback edition, so the tough cover will be useful in prolonging its life.

All in all, the children gave it the thumbs up. The twins thought having a pet elephant was altogether a great idea and said they would like one too, but they might need to get a bigger house for it to live in. Their little sister (who of course can't talk yet) was content to giggle and try to grab the book out of my hand, so that was a positive reaction from her too. You don't always need words to express your opinion after all.

Discover squawking parrots, roaring lions and buzzing bees in this bright and colourful book about animal noises. Children will love the full-colour photographs and fun animal facts, while the sturdy format is perfect for tiny hands. This is the perfect series for encouraging a child's interest and developing their knowledge.