« Trev and the Kauri Tree review 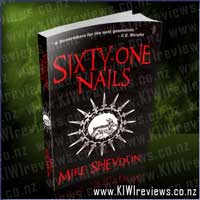 The Courts of the Feyre - 1 - Sixty-One Nails product reviews

There is a secret war raging beneath the streets of London. A dark magic will be unleashed by the Untainted...Unless a new hero can be found.

This story follows Niall Petersen, from a suspected heart attack on the London Underground, into the hidden world of the Feyre, an uncanny place of legend that lurks just beyond the surface of everyday life.

The Untainted, the darkest of the Seven Courts, have made their play for power, and unless Niall can recreate the ritual of the Sixty-One Nails, their dark dominion will enslave all of the Feyre, and all of humankind too.

Simple version:
Didn't want to put it down. Had to take every opportunity to shove my nose in it and soak up more pages. For a fantasy book, it was utterly astounding, IMHO. Like fantasy? Love this!

More detailed version:
Having been a collector of "interesting trivia" for many years, I was aware of the ceremony of the Quit Rents, but never had I thought of it in this context! As a spell, binding a doorway between worlds shut, and kept in place by mere mortals... utterly brilliant!

For a start, the idea that there are many mortals out there carrying dormant or recessive Fey genes, and thus have powers they may be unaware of, or misunderstand and thus misclassify, was quite novel for me. I haven't come acxross many "Fey" related tales, but those I have read don't cover this aspect in this manner, as more of a science fact than something mystical.

Then, factoring in the way the mystical locations through history have been incorporated into modern life, either by being altered to fit the modern theme, or simply disguised in some way akin to "hidden in plain sight". An ordinary door could open to a hallway... or a single room from which a member of the Feyre can access a Way - similar to a Ley Line, but of a slightly different type used for travelling over long distances.

I was also impressed with the way the various character backgrounds were revealed. Smooth and subtle, so that it weasn't until a key part of the plot that you realise the solution, reason or clue had been there for quite a while, sitting in the back row of the story, un-noticed until it's time to shine arrived.

Overall, a most surprising, excellent read. A real rollercoaster that explores what is for me a whole new facet of fairy-folk, unlike the cutesy bedtime tales we tell our kids. I want to say a lot more, but that would just soak up your time, and you'll understand it much better if you read it for yourself. All I can say is... I so want to be like Niall, and roll on "The Road to Bedlam".

Doggy ditties, rather witty
about a kid's best friend;
a crazy collection, a silly selection,
from A through to Z at the end.

Anybody's who's ever had a dog - or yearned to have one - will love this A-Z of ditties about lots of different breeds of dog.