« Songs of the Dying Earth review

ProdID: 2331 - The Book of Tomorrow
Written by Cecelia Ahern 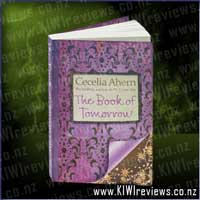 The Book of Tomorrow product reviews

Tamara Goodwin has always got everything she′s ever wanted. Born into a family of wealth, she grew up in a mansion with its own private beach, a wardrobe full of designer clothes, a large four poster bed complete with a luxurious bathroom en-suite. She′s always lived in the here and now, never giving a second thought to tomorrow.

But then suddenly her dad is gone and life for Tamara and her mother changes forever. Left with a mountain of debt, they have no choice but to sell everything they own and move to the country to live with Tamara′s Uncle and Aunt. Nestled next to Kilsaney Castle, their gate house is a world away from Tamara′s childhood. With her mother shut away with grief, and her aunt busy tending to her, Tamara is lonely and bored and longs to return to Dublin.

When a travelling library passes through Kilsaney Demesne, Tamara is intrigued. She needs a distraction. Her eyes rest on a mysterious large leather bound tome locked with a gold clasp and padlock. With some help, Tamara finally manages to open the book. What she discovers within the pages takes her breath away and shakes her world to its core.

Told in Cecelia′s imitable style, THE BOOK OF TOMORROW is a mesmerising and magical story for this spring.

Quite simply, this book is superb. The opening paragraph caught me and the next one refused to let me go. The Book of Tomorrow is written with wit and humor, yet the tension lying just beneath the surface makes this far more than just a light, entertaining read.

Set in Ireland, this book focuses around the 'coming down to earth' of a young woman, Tamara, who used to have it all. There are plenty of contemporary references in here, from Hannah Montana to Harry Potter, Louis Vuitton and an obscure reference to a film I haven't seen since I was really young - Chitty Chitty Bang Bang. Although these references will ultimately date this book, they also bring it to life, grounding Tamara in our world and thereby making her fantastic discovery all the more plausible.

Although on the surface, this might seem a story about a long forgotten scandal, it was Tamara's personal growth that moved me the most. It happened in fits and starts, never over stated. The sort of change where, looking at the girl who walks out the end of the novel, you wonder how she could ever have been the same person in that opening chapter.

Well worth a read. Good for most ages (though parents of younger children may want to read first and decide for themselves, there is an implied sex scene about three quarters of the way through).

At least, that's what everybody at Sci-Fi Junior High thinks. So ... more...