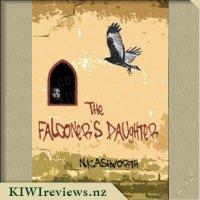 Maddie Prescott is a fourteen year-old schoolgirl living on Waiheke Island with her dad. She has no memories prior to her fourth birthday when her mother died. Maddie's mother had built a gothic tower on the island. In the tower Maddie finds a mysterious medallion and an unfinished manuscript of her mother's novel called The Griffin Trilogy. The final book Return of the Griffin was never completed. When Maddie starts to read it, she finds disturbing parallels with her own life and that of the main character Skyla - a time travelling shapeshifter.

With the support of her best friend Jess, Maddie secretly decides to train an injured hawk that she finds, naming him Weaver after Skyla's hawk in the novel. Then strange things start to happen - someone else is visiting the Tower... or is it more than one person? With Jess's help, Maddie gradually uncovers the appalling truth of her mother's death and embarks on a journey of self-discovery every bit as bizarre as Skyla's fictional one!

This was quite a surprising book. In appearance, it comes slightly wider than the average book does, and only consists of 135 pages, so I found it quite a short concise read. Despite being a concise read, the book was full of surprises, mainly trying to determine the genre that the plot fit in was largely difficult to identify until the end when all was revealed. It's quite rare to actually find a book that can weave a story in such a small space that allows multiple potential answers to hang at the same time, making predicting the ending before time elusive.

The story itself involves partial re-telling of other books that occurs inside the storyline, and uses a different font type and size to indicate what is the external and internal narratives. Despite this, it is still reasonably easy to confuse the two (hopefully in the reprints, they use bold as well just to greater differentiate between them). Apart from a couple of writing errors (simply things like "of" instead of "off" [Sorry, I really should have kept track of them]), the story was surprisingly well written and covered a large amount of plot for the space it had.

This is a story based in New Zealand (Waiheke Island, in Auckland, to be specific) so it certainly gave me a little thrill every time I saw something distinctly kiwi; whether it be the casual use of "bugger" and other expletives from a 14 year old girl, references to our native birds, or place names. But the parallels between the antagonist and the story that was woven by her mother in the books that she finds is the truly exciting part. Creating two environments that start to overlap in ways that make you question what is real, or what is fantasy; it's a story, so potentially the possibilities are endless (I know it's fiction, but is this a drama? or action/adventure? or fantasy? or science fiction?).

But one thing I love is how it approaches more sensitive issues. I don't want to go into spoilers, but there are a number of twists towards the end that connect many plot points together, but are intrinsically difficult things to talk about. So I applaud the author for inserting these generally "taboo" topics and talking about them in a way that shows potential effects of the different ways of dealing with tragedy and trauma. It is something that we as a society need to remove the stigma away from.

A bit of a pricey book, for what took me a couple of hours to read. However, I am an adult, so I imagine it would take a teen a little longer, and I would greatly encourage this quick read for youth to engage with.

When I read the premise to this book I was interested to see where the story would go, what questions might be raised, answered and left for the next in the series. The story centres around Maddie as she starts to learn more about herself and her deceased mother. Throughout the story we jump between Maddie's narrative and the story that she is reading (written by her mother) which I liked the idea of but I didn't find it really well executed. Though the two stories are written in different fonts and size, I did find it a little confusing a couple of times, I feel it could have been a little clearer.

The overall story was well written and despite my confusion I did enjoy the book.. I did find that some bits near the end felt a bit too simplistic and rushed for what was trying to be involved in the plot, by the time I got to the end of the book I wasn't enjoying it as much. The ending felt like it needed a bit more to it, I know that there's another book coming out for Maddie but it still feels like they could have included more without loosing anything from the next book.

I'm not loving this book but I did like it enough to hold onto it and I'm interested to see where the next book takes Maddie.

This book starts in the first person, a young girl describing her life, which like most teenagers is situated at high school. The writing style immediately made me feel connected to 'Maddie' the lead character. Her teacher is a 'dick' and as a reader it's easy to empathise with a picked-on Maddie and a teacher who is loving making her squirm with an impossible maths task.

Maddie has a secret which she shares with her best friend, she has started visiting her dead mother's special hideaway, a tower which her father has forbidden her from exploring. Within the tower there is a treasure trove of medieval trinkets, paintings, and even more exciting novels that her mother had written before she died. Maddie dives into this hidden world, finding that the novels mirror elements and parts of her life, is this fictional story closer to truth than fiction?

This book is set on Waiheke Island and references places that would be known to anyone who has visited there, for me it was wonderful to find real places woven within the story, particularly when the story refers to visiting Devonport, and mentions shops and parks that are real places, it added something special to the story for me.

The author has done a fantastic job of captivating the reader, (yes I will be purchasing more of her work when it is produced) and touching on two subjects that are not approached often enough in teen and young adult literature. It also uses a writing style, and a good dose of 'magic' which makes it a page turner. I read the entire book in one sitting. Our main character is 14 and as a Mum I would pick up a book about a 14 year old and assume it was a good choice for them to read, as this book has some depth to it, and is a good read, I would encourage adults to read through it first, and if teens then have questions from some of the content, some good discussion could follow. All in all I would say this is a book that will be popular with teens and young adults, and is worth purchasing. I do think the reading is a little sudden, but I feel it has been deliberately been left in this way to make way for a sequel, leaving the reader wanting more.

My initial reaction on seeing the title of this book was that it was a hard copy of the online publication of the same name, but as soon as I read on I realised that the authors are different and the books are definitely not the same. I found the cover graphic impressive, and certainly the information on the cover flaps intrigued me so I thought this would be an interesting story.

From the start, I was drawn into the story. I liked the way the fantasy element built up and I found the variation in font size useful for working out where and when the action was taking place. The diverse characters were strongly drawn, and prose style reflected the times that the characters lived in. Maddie's sections are written in a casual, modern style while the sections set in past times are written more formally.

For me, the story began to pall when reality started to take over from fantasy. I felt that the progression was too abrupt and dealt with over simplistically. Without giving away too much of the plot, I would like to have seen the book expanded so that the transition to reality was much slower and explored in much more depth. As it stands, it does not ring true and left me rather confused as to where some of the loose ends fitted in. I asked a friend to read the book to see what her opinion might be as she is a quick reader and could be relied on for honest feedback. Her response was similar to mine even though I had deliberately not shared my reactions with her beforehand.

There was one more thing that really jarred - that was the inclusion of two misprints (no doubt a casualty of spellcheck!) that had not been spotted during the proofing process. This sort of thing is always disappointing as the physical book is actually quite beautiful and a lot of time and thought have gone into its production. Hopefully these will be corrected before the book goes for a second printing.

On balance, I enjoyed the story for its own sake. Apart from the issue I have with the ending, it is basically well written and some of the background information on falconry is fascinating. One could almost imagine Waiheke Island relocated to ancient Anglesey as the story traverses time and place. There is certainly room for a sequel, which could trace Maddie's follow-on story and build on the characters already established.

We're going on a moa hunt. We're not scared.

We're going to catch a BIG one. We're NOT scared!

Join in the search! But you'll need to keep your eyes open . . . could it be that a moa is hunting YOU?