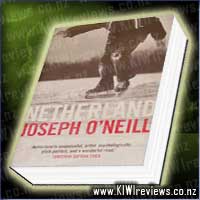 Disclosure StatementFULL DISCLOSURE: A number of units of this product have, at some time, been supplied to KIWIreviews by the company for the purposes of unbiased, independent reviews. No fee was accepted by KIWIreviews or the reviewers themselves - these are genuine, unpaid consumer reviews.
Available:
July '08

In early 2006, Chuck Ramkissoon is found dead at the bottom of a New York canal.

In London, a Dutch banker named Hans van den Broek hears the news, and remembers his unlikely friendship with Chuck and the off-kilter New York in which it flourished: the New York of 9/11, the powercut and the Iraq war. Those years were difficult for Hans - his English wife Rachel left with their son after the attack, as if that event revealed the cracks and silences in their marriage, and he spent two strange years in the Chelsea Hotel, passing stranger evenings with the eccentric residents.

Lost in a country he'd regarded as his new home, Hans sought comfort in a most alien place - the thriving but almost invisible world of New York cricket, in which immigrants from Asia and the West Indies play a beautiful, mystifying game on the city's most marginal parks. It was during these games that Hans befriended Chuck Ramkissoon, who dreamed of establishing the city's first proper cricket field. Over the course of a summer, Hans grew to share Chuck's dream and Chuck's sense of American possibility - until he began to glimpse the darker meaning of his new friend's activities and ambitions...

I was somewhat sceptical when I received this book to review. Being not much a cricket fan, I was unsure as to what to expect.

This story tells you of the life of Hans van den Broek, living, or trying to, in Post 9-11 New York. Of the struggles he and his Wife Rachel go through, with their son Jake, and their separation, with Rachel moving back to England, and Hans' trans-Atlantic attempt at parenting.

This novel takes you through his adventures with a mysterious chap: Chuck Ramkissoon. A man who Hans meets first at a Cricket game where Chuck is the referee. Hans gets taken through and shown Chuck's vision of creating the New York Cricket Club, at a disused airfield. The trials and tribulations of both Gent's journey, to express their mutual passion for the sport, to others.

The book opens with Hans being advised of Chuck's demise, and then travels back in time, to when Hans was located in New York. It goes onto details hi and his wife's (Rachel) fears, of living in a post-9/11 New York, and eventually Rachel leaving New York, with Jack, their son.

There were no holds barred by the author when it comes to expressing the narrator's emotions, his love/hate relationships, His love for his son, and the mixed emotions he feels for his wife.

I shall not give away all the dark secrets of this read, however I would recommend this book to anyone who either: Really likes cricket. Or likes reading of the adventures of an everyman with a dream.

One misfired spell is all it took to send investigative reporter Devin Crossman on a mission to uncover all the secrets of bounty-hunting witch Rachel Morgan, and expose them to the world.